Broadband in the Black Rural South

Broadband in the Black Rural South

Although Senate Republicans blocked the start of final debate on bipartisan infrastructure legislation this week, Washington remains hopeful that there's a deal that can get done before the August recess begins. Some new research from the Joint Center for Political and Economic Studies, Expanding Broadband in the Black Rural South, highlights the importance of addressing the digital divide—and doing it as soon as possible. The Joint Center examined the overlooked and unique plight of Black residents in rural counties with populations that are at least 35 percent Black (152 counties in 10 Southern states), which the Joint Center refers to as the “Black Rural South.”

As Dr. Dominique Harrison, the Joint Center's technology policy director, writes, "More than almost any other group, Black communities in the Rural South lack affordable, highspeed, quality broadband—38 percent of African Americans there report they do not have access to home internet. This is driven by both the lack of affordability and availability of broadband services. Expanding broadband could help reduce the deep racial and economic inequalities in education, jobs, and health care in the region."

According to Federal Communications Commission data, which generally overstates broadband's reach, providers have failed to deploy broadband infrastructure offering service at speeds of at least 25/3 megabits per second to a greater share of residents in the Black Rural South than other regions. The deployment of faster, quality broadband infrastructure in concentrated higher-income areas—also known as “digital redlining"—facilitates economic and racial disparities.

Of course, broadband adoption depends on more than just availability. Affordability plays a major role, especially for low-income households. According to the Pew Research Center about four-in-ten adults with lower incomes do not have home broadband services (43%) or a desktop or laptop computer (41%). And a majority of Americans with lower incomes are not tablet owners. By comparison, each of these technologies is nearly ubiquitous among adults in households earning $100,000 or more a year. Black households in the Black Rural South are much more likely to have incomes under $35,000 and less likely to have broadband. 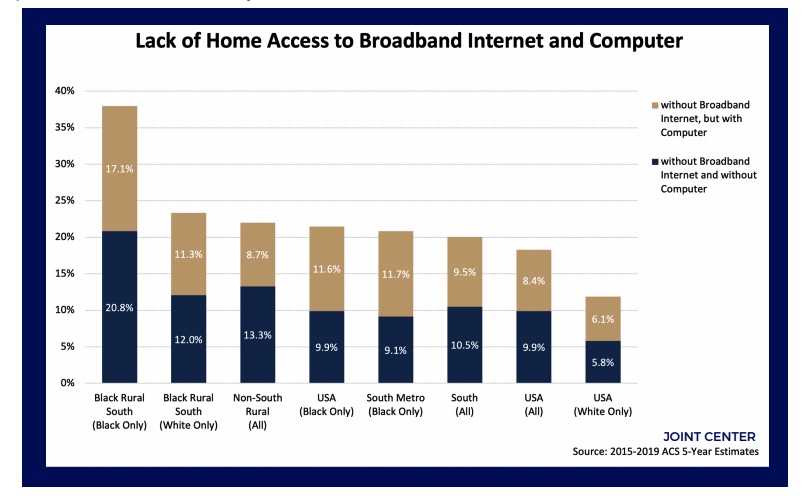 The Joint Center offers ten recommendations to ensure high-speed, quality broadband is affordable and available in the Black Rural South:

The timing of the Joint Center's research should aid the deliberations in Congress about making broadband more available and affordable throughout the U.S. But the conversation about reaching truly universal broadband is ongoing. On July 28, Dr. Harrison will moderate an all-star panel discussing the challenges and solutions to expanding broadband in the Black Rural South.

Joining Rep. Clyburn is Federal Communications Commissioner Geoffrey Starks who has consistently advocated for broadband deployment that helps rural communities tap into economic and educational opportunities that may not be close to home, which both encourages young people to stay and attracts new residents and employers.

Benton Institute Board Member and former-FCC Commissioner Mignon Clyburn will also be on the panel. While at the FCC and after, she pushed for affordable universal telephone and high-speed internet access, greater broadband deployment and adoption throughout the nation, and transparency in regulation.

Next Century Cities Executive Director Francella Ochillo will also be part of the discussion, contributing a local perspective. Next Century Cities elevates the voices of local officials who are working to expand high-speed connectivity. Ochillo is an attorney and digital rights advocate who has worked on a variety of technology and telecommunications issues with a specific focus on assessing the impact of policy proposals on unserved and underserved communities.

For more information on the panel, see jointcenter.org/event/webinar-expanding-broadband-in-the-black-rural-south