Philadelphia and the Digital Divide: Substantial Progress Since 2019, but Work Still to be Done

Philadelphia and the Digital Divide:

Substantial Progress Since 2019, but Work Still to be Done

Public policy initiatives can make a positive difference in tackling social problems. Given the skepticism many Americans have about the efficacy of government-led interventions, the preceding sentence might qualify as a headline at The Onion. However, times of crisis motivate people to marshal the resources to solve problems. Evidence from a new survey of Philadelphia households shows that publicly-led collaboration can have an impact—in this case on the digital divide.

A June-July 2021 survey of 2,500 Philadelphia shows that—in the aftermath of the public, private, and philanthropic sectors coming together—there has been substantial progress in closing digital gaps in the city. In 2019, American Community Survey (ACS) data showed that 70% of Philadelphia households had wireline broadband at home, a figure that grew to 84% according to the “Connecting Philadelphia” report. That is a sizable change. The Pew Research Center, for instance, shows that, nationally, broadband adoption grew from 73% to 77% over a similar timeframe. What accounts for the fast growth rate in the City of Brotherly Love? 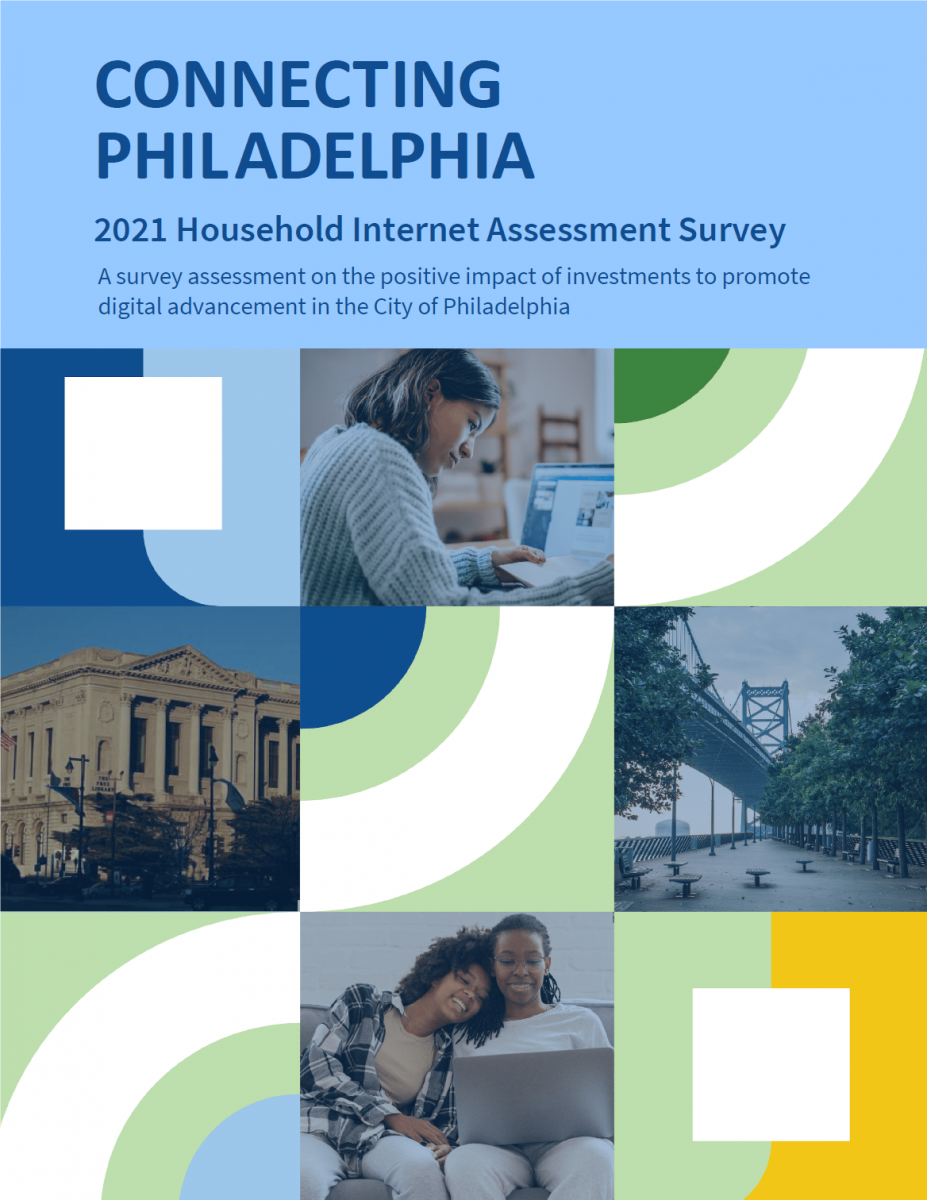 The survey shows that some of this above-average growth is due to people taking advantage of free or discount internet offers. The survey finds that 9% of Philadelphia households have signed up for free or discount internet programs, such as those made available by Comcast Internet Essentials, T-Mobile Project 10million, or PHLConnectED. In other words, of the 14-percentage point increase in home broadband adoption from 2019 to 2021, free or discount offers account for 9 points. Many (about two-thirds) of those who have signed up for free or discount offers say it would be difficult for them to have service without these service plans. This means that these offers are doing two things: they are easing the financial burden of connectivity for many households and adding new ones to the network.

Discount offers also have the highest incidence among target populations. Some 21% of households with kindergarten through 12th-grade students have signed up for one of these discount or free offers. For low-income Philadelphians (those whose incomes are below $20,000 annually), 17% had taken advantage of one of these offers. Given that 31% of low-income Philadelphia households lost internet connectivity during the pandemic due to difficulty paying their internet bills, these offers serve an acute need.

Although progress has been significant, other data shows that sustaining it will take continued work. The survey finds that one-third of Philadelphia households are “subscription vulnerable,” in that their economic circumstances may mean they cannot maintain their home subscriptions. These households either lost service at some point since the pandemic began, would find it hard to keep it without free or discount plans, or live at or near the poverty level. This comes to 32% of all Philadelphia households and 39% of K-12 households.

Another cautionary data point pertains to awareness of free and discount offers. About one-third (31%) of those surveyed had heard of discount internet offers such as Internet Essentials, T-Mobile’s Project 10million, or PHLConnectED. Only 13% had heard of the Federal government’s Emergency Broadband Benefit, which launched about one month prior to the survey. There may also be issues concerning ease of enrollment. Among low-income households, 26% did not have time to apply (which can be a proxy for problems encountered during the enrollment process) and 7% found the sign-up process to be difficult.

Notwithstanding progress, the Philadelphia Household Internet Assessment Survey shows gaps among certain demographic groups. Older adults (age 65 and above) are less likely to have high-speed subscriptions at home, with 67% saying they have service. And only 5% of older adults have signed up for a free or discount offer. Spanish-speaking Hispanics also have lower adoption rates. Of households who chose to take the survey in Spanish, 67% subscribe to broadband.

For households without home broadband, the survey finds that cost is the chief culprit. Among these households, 56% said the monthly access fee was a barrier and 50% said they could not afford a computer. When asked to specify the most important reason for not having service, clear patterns emerged:

The survey also asked broadband subscribers to identify the monthly cost of service that they would consider too expensive for their household budgets. Some 90% said they considered $20 per month to be too expensive. Many of these respondents have service at rates above $20—often well above. They think service is too expensive, but not unaffordable. At lower income levels, however, households subscribe to service—in many cases costing more than $20 per month—and may face real trade-offs. Do they forgo some goods and services in order to make sure the internet is there for their school-age children?

To sustain progress, the Connecting Philadelphia report recommends the following:

Note: The survey was conducted with the support of the City of Philadelphia and the collaboration with Wilco and CentriTech Foundation in developing it.

John Horrigan is a Benton Senior Fellow. He designed the Philadelphia survey and analyzed the data.

Nov 3—Meeting of the Communications Equity and Diversity Council (FCC)

Nov 18—How Will Online Advertising Work In A World Without Cookies? (Center for Data Innovation)