For many, the digital divide is the gap between who has access to broadband infrastructure or who does not. But a truer definition is the gap between who's actually using our most powerful communications tools and who is not. Using this broader measure and examining use around the world, we see that women are being left offline. And this gender gap costs everyone.

This week, the Alliance for Affordable Internet, a global coalition working to drive down the cost of internet access in low- and middle-income countries, released The Costs of Exclusion: Economic Consequences of the Digital Gender Gap. The findings are troubling to say the least: 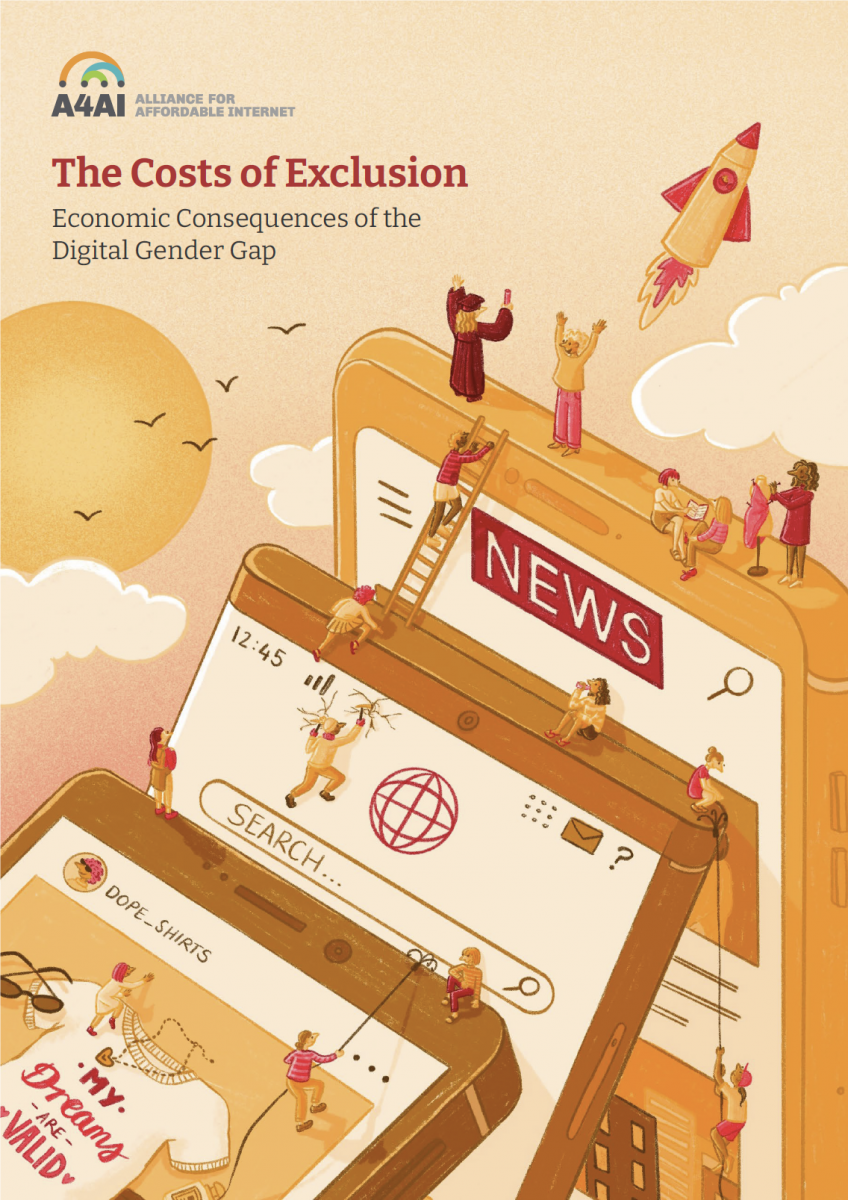 Affordability: The cost of connectivity keeps women offline. Handset cost remains one of the most frequently cited reasons among mobile phone users in low- and middle-income countries for not using the internet. Beyond handsets, the cost of data negatively limits how much 25% of respondents use the internet in three low- and middle-income countries.

Wage Gaps: Gender pay gaps make the problem of the cost of connectivity worse for women. In a 2021 survey of device costs in 187 countries around the world, the cheapest new smartphone costs $104 on average. As a fraction of the average monthly income, this is roughly one-quarter. However, in the context of the global gender wage gap, where women globally earn around 77 cents for each dollar a man earns, these costs are, on average, higher for women as a percentage of their income. By that ratio, if a man could pay for a smartphone on one month’s wages, a woman would need to work an extra ten days to afford the same device.

Privacy/Security: Women, generally, also hold higher fears around online privacy and security. In nationally representative surveys in Colombia, Ghana, and Uganda, women more frequently reported being afraid about personal data privacy at the same time as they reported lower rates of creating content online. In the study's focus groups in Côte d’Ivoire, Nigeria, India, and Bangladesh, women remarked on the fear of being manipulated or targeted because of what they posted on social media. In their own eyes, the internet is not a safe place for women.

Literacy and Skills: Educational gaps by gender also keep women offline. Along with handset cost, literacy and skills are one of the two most common barriers to mobile internet use. As the literacy gap between men and women in the world persists (90% of adult men, compared to only 83% of adult women as of 2019), this gap replicates itself in the digital world. Differences in mean years of schooling also replicate into lower access to digital skill-building in an educational context. Together, the educational disadvantages against girls become digital divides for women.

The accumulation of these individual barriers that discourage women from using the internet – each a small manifestation of the digital gender gap — has a cumulative impact on the content that women see and the experiences they have online. At the same time, women report facing greater family and social pressures against internet use.

Together, the financial, technical, safety, and educational gaps faced by women on an individual basis accumulate into a social norm that reinforces the myth that “access to technology and the internet by women is ... immoral, inappropriate, or unnecessary.” This myth discourages women and girls from participating in the online world, defers the potential benefits to their own education, health, or wellbeing, and hinders the potential cultural and economic benefits of the greater digital inclusion of women and girls throughout the world.

In the early 2000s, the overwhelming majority of new internet users were male. This began to change about a decade later as the internet became more ubiquitous throughout the world. Between 2011 and 2020, the share of women connected to the internet rose from 12.2% to 34.3%. Despite this increase, it wasn’t substantial enough for women to catch up with their male counterparts.

The Costs of Exclusion

Beyond the social cost, excluding women from the digital economy takes a significant economic toll on low and lower-middle income countries (LLMICs).

The Alliance for Affordable Internet estimates that, over the last decade, LLMICs have lost a total of $1 trillion USD in gross domestic product (GDP) to the gender gap in internet use. Based on current tax-to-GDP ratios in these countries, this loss represents an estimated $24.7 billion in lost tax revenue in 2020, revenue that could be invested in education, health, housing, and transportation.

As the Covid-19 pandemic has had a devastating toll on LLMICs and as their economies have contracted, the need for new, robust sources of economic productivity has rarely been greater. At the same time, the pandemic and subsequent lockdowns throughout the world have shown how internet access is an essential lifeline for millions. Access has enabled economic activity in helping suppliers reach new markets, enabling consumers to purchase essentials in the context of the pandemic; and it has facilitated digital payments. Since the pandemic has pushed more of the world online, the economic returns associated with connectivity have likely risen. The Alliance for Affordable Internet estimates that closing the gender gap offers billions in economic activity, but further analysis of the economic impact of Covid-19 on the digital world will offer a full picture of the consequences of not being connected during and after the pandemic.

Moreover, too often today, women who connect to the internet only benefit from a very limited connection. In many instances, women are only able to connect infrequently or are limited by a slow connection with minimal bandwidth. Where this is the case, users are not able to benefit from data-intensive online activities (e.g., video calling, online education, and telemedicine) and are unlikely to be able to reap all the economic benefits the internet can offer. Women that only benefit from a marginal connection to the internet are unlikely to reach their full potential—economic or personal.

Adopted in 2016 by attendees of the inaugural Africa Summit for Women and Girls in Technology, the REACT framework offers strong guiding principles for closing the digital gender gap: rights, education, access, content, and targets.

Education: Use education to equip everyone – especially women – with the skills they need to access and use the web.

The Alliance for Affordable Internet estimates that if countries are able to break with the past and significantly close the gender gap in internet connectivity in the next few years, LLMICs will be able to generate over half a trillion dollars in additional gross domestic product (GDP) between 2021 and 2025. Conversely, if little changes during this time, the total loss of GDP between 2011 and 2025 among LLMICs due to the gender gap will surpass $1.5 trillion. This, as well as other equity benefits, is a powerful reason to close the digital gender gap.

Oct 21—Internet Policy Wars 3.0 / Is The Past A Prologue To The Fight For Web3? (Congressional Internet Caucus Academy)

Nov 3—Meeting of the Communications Equity and Diversity Council (FCC)