The pandemic spurred policymakers and community leaders around the country to create programs to connect those without home broadband service or computers. These programs have had an impact. New government data show sharp increases in broadband and computer adoption in the 2019-to-2021 time frame. Initiatives such as the Affordable Connectivity Program (ACP) have helped address “subscription vulnerability” for low-income households. With progress evident, it is time to extend and build on the ACP and local affordability programs.

Recently released data from the American Community Survey shows wireline broadband adoption grew by 4.7 points between 2019 and 2021, more than twice the 2.0 points of growth between 2017 and 2019. This suggests that pandemic-driven initiatives to address home adoption gaps have had an impact.

Notably, increases in home broadband subscriptions have been most pronounced in cities with higher-than-average rates of poverty. Some of the cities with the strongest growth in wireline subscriptions from 2019 to 2021—such as Detroit, Cleveland, and Baltimore—had among the highest levels of households at or below the 125% federal poverty level (FPL).

Recent progress on home broadband adoption has been greatest among America’s least wired cities. The norm in internet access for Americans today is to have both home wireline and cellular data service. In some cities, such as Detroit and Baltimore, nearly 20% of households only had online access via a cellular data plan. Yet those cities have seen substantial declines in those figures, with Baltimore seeing nearly a 7-point drop in cell-only access. Cities experiencing above-average declines in cell-only households include those with high shares of households at or below the 125% FPL, such as Baltimore, Detroit, Fresno, and Tucson.

What are the implications for state and local policymakers making plans for Broadband Equity, Access, and Deployment and Digital Equity Act funding from the Infrastructure Investment and Jobs Act?

The data shows that progress is possible. State broadband planners should determine where it is happening, build upon it, and replicate it in other parts of the state. It is not wholly surprising that there has been a strong increase in broadband subscribership, given research to date on the digital divide during the pandemic. A 2021 Philadelphia survey showed that 9% of Philadelphia households (and 17% of low-income ones) said they used a discount or free internet offer for service. Analysis of Census Pulse surveys in 2020 showed increases in computer availability for K-12 households in the first year of the pandemic. Numerous states (e.g., Connecticut) and cities partnered with philanthropic organizations to distribute computers to households with school-age children. Interventions to address social problems do not always go well. Yet they seem to be working for addressing the digital divide in the face of the pandemic.

2. Do not grow complacent—subscription vulnerability is a persistent problem

A key tool in promoting broadband subscribership for low-income households is the Affordable Connectivity Program (ACP)—a $14.2 billion program that provides a $30-per-month subsidy to low-income households (i.e., those whose annual incomes are at or below 200% of the federal poverty level). The program is scheduled to sunset when funding runs out—which could occur sometime in 2024. Some states, such as Maryland and New York, have added to that subsidy level, but those funds are likely to be one-time benefits, given that they were financed by American Rescue Plan Act funds. There may be a sense among some policymakers that funds for service subsidies are a one-time assault on low-income households’ affordability challenges. Surely, the argument goes, this will “solve the problem.”

But the digital divide is not amenable to a one-time fix. Research shows that not all households who have a broadband subscription can maintain it. “Subscription vulnerability” captures how maintaining access is fragile for many households. For lower-income households (i.e., those whose annual incomes are $50,000 or less), half (49%) live near the precipice of disconnection in that they have lost connectivity due to economic hardship (during the pandemic), live at or below the poverty line, or say it is very difficult for them to fit broadband service into their household budgets. For low-income households, scarce resources often result in trade-offs that many people in the United States do not face. What expenses get dropped if employers cut hours or a job layoff occurs? The internet connection at home may have to take a hiatus.

Since the economy will not be immune to recession in the future, policymakers need to have “subscription vulnerability” top of mind with respect to universal service policy. This means extending the Affordable Connectivity Program beyond its current funding limit. The ACP and its predecessor (the Emergency Broadband Benefit, or EBB) have helped tackle service affordability problems for low-income Americans that the pandemic brought to the fore. But as the pandemic’s impact on the economy fades, this does not mean that affordability issues will evaporate.

3. Focus more on affordability and less on technology

When the ACP (and its predecessor, EBB) launched, there was some concern that most of the early enrollment was for wireless service. Some 68% of EBB signups were for wireless plans, with 31% for wireline plans. Wireless carriers, it appears, converted many Lifeline customers to higher-priced wireless plans with more generous data allotments. Although undoubtedly of value to consumers, wireless plans may not be suitable for homes with multiple individuals using the internet for work and school. Perhaps the subsidy was not having one of its intended effects: to help people have robust internet access at home for video-intensive school or work applications.

However, since the early days of EBB, adoption patterns have shifted under the ACP. Through September 2022, 56% of the 13.5 million ACP enrollees are wireless users, with 43% having enrolled in wireline service. The higher share of wireline enrollments in September 2022 compared with the end of 2021 means wireline enrollment must have been comparatively strong since the ACP began in January 2022. In fact, looking at enrollment figures for ACP over the January-to-September time frame shows that since the beginning of this year, 68% of those enrolling in the program have opted for wireline service.

These shifting adoption patterns indicate that the ACP-eligible population is using the subsidy to satisfy their affordability needs as they see them. The subscription vulnerable—those who find it very difficult to afford the service they have—may not be so vulnerable in light of the ACP subsidy, no matter which service type they choose. They may not be incremental additions to broadband subscriber figures, but they are less likely to fall off the network. And, as the robust recent wireline adoption numbers for ACP suggest, the ACP subsidy may be opening doors to home wireline service to some who have not previously had it.

We are in an era when the potential to tackle the digital divide has never been greater. Newly released ACS data show that taking square aim at the problem yields payoffs. Stakeholders leading efforts in the past several years to increase broadband adoption should pause to take credit. But not for too long. New funds for networks will not solve problems overnight and will neither necessarily nor entirely address service affordability. Subscription vulnerability will endure. Maintaining funding to help households address affordability challenges—through the Affordable Connectivity Program—is a looming concern.

Read more in Broadband Benefit Programs are Helping to Close the Digital Divide. 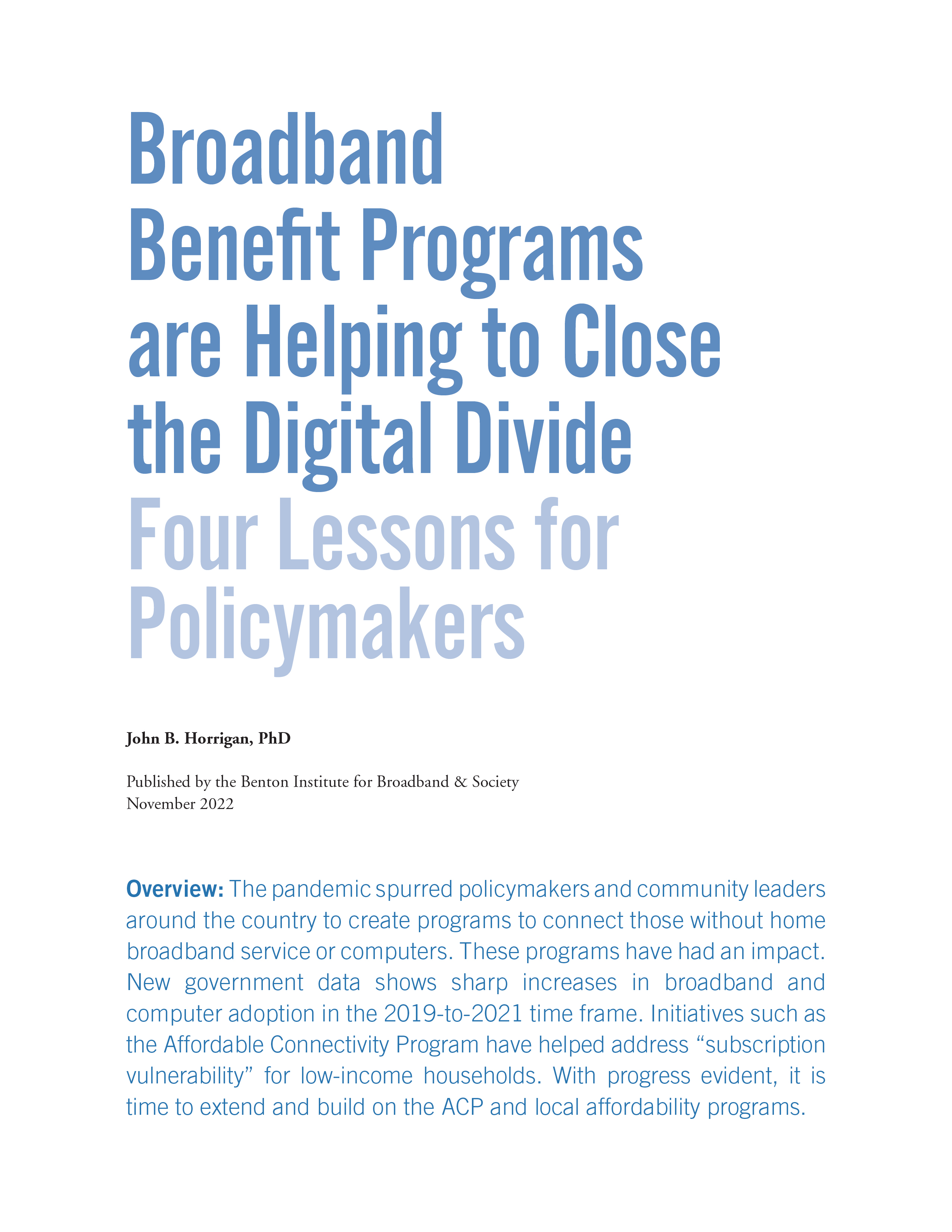 John B. Horrigan is a Benton Senior Fellow. He is a national expert on technology adoption, digital inclusion, and evaluating the outcomes and impacts of programs designed to promote communications technology adoption and use. Horrigan served at the Federal Communications Commission as a member of the leadership team for the development of the National Broadband Plan. Additionally, as an Associate Director for Research at the Pew Research Center, he focused on libraries and their impact on communities, as well as technology adoption patterns and open government data.