Census Pulse data shows some growth in computer access for students, but not much for internet availability at home

The pandemic has made getting computers and internet connections to households with school-age children a priority. The “homework gap” is sizable. Before the pandemic, some 16.9 million children under the age of 18 lived in households without wireline internet service and 7.3 million live in homes without a desktop, laptop, or tablet computer. What was a homework gap is now a learning gap.

Many states and localities have responded. According to the Pew Charitable Trusts, 12 states have used Coronavirus Relief Funds (CRF) to address internet connectivity issues for online learning. Philanthropy has also stepped up its efforts to help communities address students’ technology needs during school closings.

Have these initiatives helped? Census Pulse surveys offer some insight. The Census Bureau began these surveys shortly after the pandemic began to track key issues that the pandemic brought to the fore, such as employment, food security, physical and mental health, and educational disruption. The surveys have been fielded in periodic waves (usually about two weeks in duration). This allows for trend comparisons of results at different points in time.

The following two charts lay out where things stand on computer and internet availability for households with students, comparing May 2020 to November 2020. 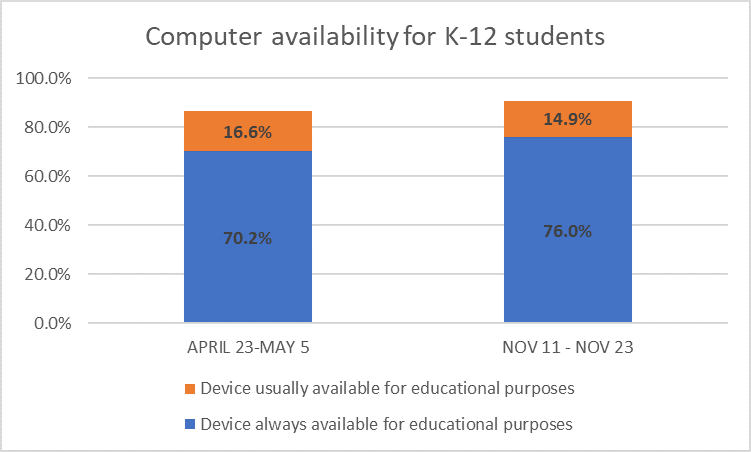 Device availability (either always or usually) increased from 86.7% to 90.9% from May to November, with a notable increase in computers always being available (70.2% to 76.0%). Translating that into numbers (assuming a K-12 student population of 53.1 million) means that about 3 million more student households had computers always available for educational purposes in November 2020 than in May 2020.

More computers in student households were also coming from schools according to the November 2020 data. In May, 37.4% of households with students said a computer was provided by a child’s school or school district. This figure climbed to 62.0% by November.

The picture for internet access at home is different when comparing May to November. 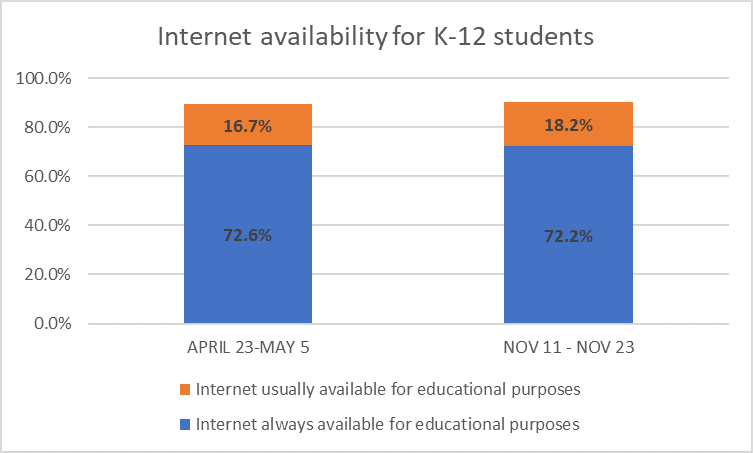 Households with students in kindergarten through 12th grade have seen little change in internet availability since May, with that figure increasing from 89.3% to 90.4% (a statistically significant difference). Essentially the same share of these households has the internet always available for educational purposes over the 6-month time frame. For internet availability that is “always” or “usually” present, about 590,000 more households with K-12 students have the internet since May 2020.

One way to interpret these results is to conclude that it is a lot easier to deliver computers into students’ hands than it is to provide their homes internet subscriptions. There are a number of examples of local groups and philanthropies creating programs to ensure students have computers for learning. This was the case in Connecticut and Chicago, to take just two examples. Schools are a natural distribution mechanism with existing relationships with households in need, so there is a pipeline to build upon.

Home internet service seems to be a knottier problem. The nation is not lacking for low-cost internet offers, although public awareness and ease of signing up for them are sometimes issues. Some communities have benefited from “single payer agreements” by which school districts negotiate with internet service providers for bulk plans for students. The school district, in turn, provides internet service for free (or at substantial discounts) for students in need. A number of places have such initiatives, such as Chicago, Chattanooga, Central Ohio, Connecticut, and Kansas City. Many aim to help students while including low-income households of all types.

As promising as these initiatives may be, the limited progress on home internet access for students since the start of the pandemic suggests a need for more action. Some have advocated for using the Federal Communications Commission’s E-Rate program to improve home internet access, arguing that the program’s objective of using the internet to further learning applies to home internet service when schools are closed. The current FCC has declined to authorize this, saying that the program’s authorizing statute does not permit such expansion, though there is disagreement on that interpretation. Whether or not to adapt the E-Rate to support single-payer agreements is a question for the next FCC. The data, for now at least, suggest more experimentation is warranted to address the learning gap at a national scale.

John B. Horrigan is a frequent contributor to Benton's Digital Beat and a Senior Fellow at the Technology Policy Institute, with a focus on technology adoption, digital inclusion, and evaluating the outcomes and impacts of programs designed to promote communications technology adoption and use. Horrigan is also currently a consultant to the Urban Libraries Council. He served at the Federal Communications Commission as a member of the leadership team for the development of the National Broadband Plan. Additionally, he has served as an Associate Director for Research at the Pew Research Center, where he focused on libraries and their impact on communities, as well as technology adoption patterns and open government data.

© Benton Institute for Broadband & Society 2020. Redistribution of this email publication - both internally and externally - is encouraged if it includes this copyright statement.