Our previous article noted that only 57-59% of seniors currently use the Internet or go online, compared to 86-88% of all adults age 18+ (Pew Research Center, 2014). This age-based disparity has lessened recently, due in part to: 1) efforts throughout the nation to promote senior digital literacy, and 2) the initial “cohort effect” of tech-savvy baby boomers who began entering the age 65+ category in 2011.

Influence of Income and Education 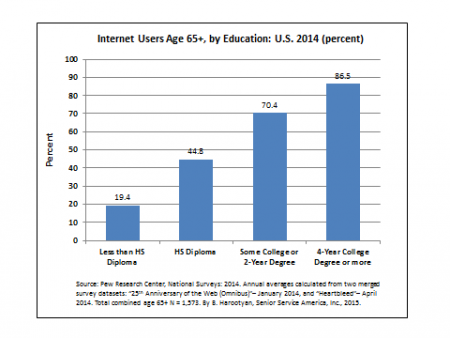 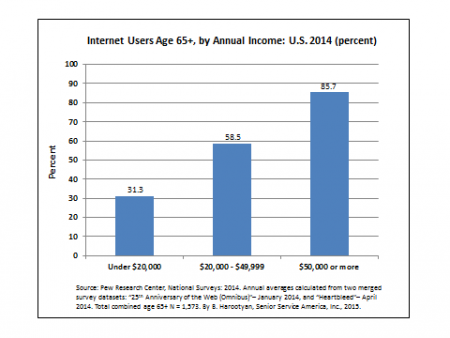 The digital divide between the least and most advantaged elders is even more pronounced when education and income are combined. Less than 22% of Americans age 65+ with family incomes below $20,000 and no better than a high school education are Internet users. In comparison, 89% of their age peers with incomes of $50,000 or more and some college education or better are Internet users. 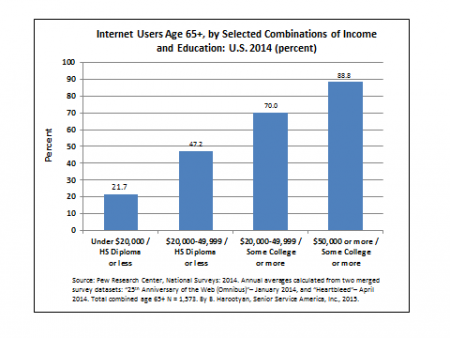 Addressing these digital disparities among seniors will not be easy. Some observers feel that time will “cure” these differences. But ignoring more than 18 million offline seniors is both near-sighted and counter-productive to their well-being. And it would take at least 15 years for these disparities to substantially lessen. Here’s why.

Educational attainment differs substantially among the generations. Pre-boomers are the oldest Americans – born before 1946 and now ages 70+. Baby boomers, born during 1946-1964, reached ages 51-69 this year. We believe that the “education effect” on Internet use is mirrored in the “cohort effect” represented by the much higher percentage of Internet users among boomers (84%) than pre-boomers (56%).

The differences in educational attainment between these two generations are substantial. In 2014, less than 11% of persons ages 50-69 did not graduate from high school, compared to nearly 19% who are ages 70+. And 58% of Americans ages 50-69 but only 45% of those ages 70+ had at least some college. 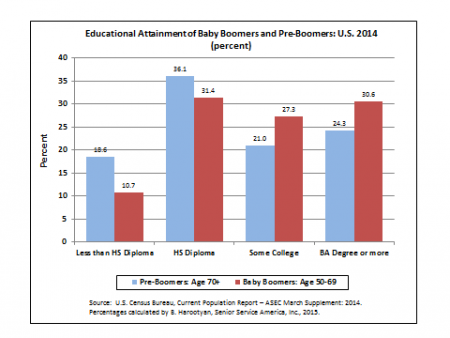 Taken together, these factors help us understand that the age-based digital divide is driven by deeper socioeconomic disparities within the older population.

Reaching Out to Disadvantaged Elders

Given that disadvantaged elders are a large proportion of offline seniors, special outreach efforts are required to help them cross the digital divide by addressing three major barriers: computer anxiety, assumed irrelevance of the Internet, and cost concerns.

Senior Service America, Inc. (SSAI) provides one example of varied efforts around the nation to inspire seniors who are least likely to use computers. SSAI has conducted pilot projects for group “Taste the Internet” sessions using tablets. Age peers, most of whom are participants in the Senior Community Service Employment Program (SCSEP), work with one or two offline seniors to show how easy it is to use tablets and to demonstrate various web-based functions and Internet content of interest to the seniors. Such sessions are labor-intensive but not necessarily costly.

Ideally, “tastings” use the following successful strategies for older learners:

Our next article will review other efforts to reduce the senior digital divide and what we’re learning about the use of tablets and other devices for senior learners.

Cecilia Garcia, former Executive Director of the Benton Foundation, is a communications advisor with an extensive background in public affairs, television production and advocacy.

Bob Harootyan is the research manager at Senior Service America, Inc. (SSAI), where he directs internal and external projects related to low-income older workers and the aging workforce. Bob has nearly 50 years of experience in applied research in academia, state government, the U.S. Congress, and national nonprofit organizations. He is a Fellow of the Gerontological Society of America.