A Deeper Dive into the Data: Seniors and the Internet

A Deeper Dive into the Data: Seniors and the Internet 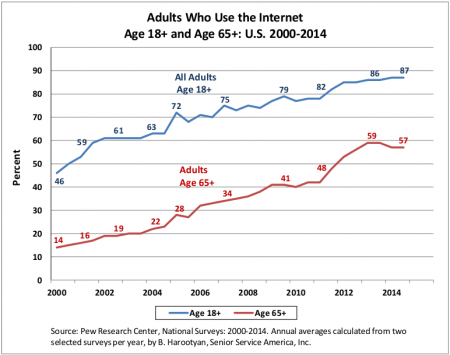 At a time when communications technology is evolving at a frantic pace and the Internet is fast becoming the primary conveyor of information and services, a significant segment of our population remains offline. National survey data for 2014 show that 41-43% of persons age 65+ do not use the Internet, compared to only 13-14% of all adults age 18+ (Pew Research Center, 2000-2014). The reasons for this continuing digital divide involve seniors’ concerns about affordability, a belief that the Internet holds no relevance for them, and a fear that computers are too difficult to learn.

The “senior digital divide” persists because of affordability, a belief that the Internet holds no relevance for older Americans, and a fear that computers are too difficult to learn

This “senior digital divide” is greatest among the oldest and least advantaged older adults. Of the estimated 18.9 million offline elders in 2014, 61% (11.5 million) are age 75+. But older age is not the whole story. Seniors with the lowest incomes and least education are much more likely to be offline – double and triple jeopardy.

Further analysis combined age, income and education to discern the full extent of the digital divide faced by the most disadvantaged elders. While 90% of seniors with incomes of at least $50,000 and ‘some college or more’ are Internet users, only 22% of seniors with incomes less than $20,000 and a ‘high school diploma or less’ are online. Thus, the most advantaged seniors have an Internet-user rate that is more than four times greater than the rate for the least advantaged seniors. Minority elders - who on average are poorer and less well educated than non-minority elders - are also least likely to be online.

Our analysis pinpoints the triple jeopardy of being on the wrong side of the digital divide. It also suggests that age is less of a barrier only when we account for the importance of income and education. We cannot change people’s age. And significant improvements in seniors’ income and education are unlikely. Clearly, then, there are substantial challenges in reaching out to the overwhelming majority of seniors who are offline – the poorest and least educated. These offline elders are also more likely to be socially and physically isolated, in poorer health, and technologically unaware. They exemplify the three major reasons for the senior digital divide – assumed irrelevance of the Internet, computer anxiety, or high cost.

Reaching Out to Offline Elders

For the past year, Benton and Senior Service America, Inc. (SSAI) explored approaches to address these issues, building on SSAI’s successful Digital Inclusion Initiative (DII) conducted from 2009 through 2011. A subsequent iteration labeled “DII-2” focuses on dispelling some of the fear and anxiety about computer use while demonstrating the benefits and relevance of accessing the Internet. We conducted group sessions using iPads and laptops to give seniors a hands-on “Taste of the Internet.” This approach was informed by reports from other computer projects and research that showed positive results when offline seniors learned about the Internet and the ease of using the latest computer technologies.

This period of exploration also revealed many challenges and lessons in addressing this problem. Our general impression is that interventions such as “A Taste of the Internet” can bring offline seniors “to the keyboard,” or better, “to the touch screen.” These lessons, as well the argument for government support, will be explored in subsequent articles.

Cecilia Garcia, former Executive Director of the Benton Foundation, is a communications advisor with an extensive background in public affairs, television production and advocacy.

Bob Harootyan is the research manager at Senior Service America, Inc. (SSAI), where he directs internal and external projects related to low-income older workers and the aging workforce. Bob has nearly 50 years of experience in applied research in academia, state government, the U.S. Congress, and national nonprofit organizations. He is a Fellow of the Gerontological Society of America.