This article originally appeared on The Pew Charitable Trusts website and is reprinted with permission.

In November 2021, President Joe Biden (D) signed the Infrastructure Investment and Jobs Act into law. Among many other provisions, the law established the Broadband Equity, Adoption, and Deployment (BEAD) Program, the federal government’s most ambitious investment in high-speed, affordable internet to date. BEAD dedicates more than $42 billion to construct broadband networks, subsidies to offset the cost of internet service for lower-income households, and programs to provide end users with the devices and training they need to use the new and upgraded networks. The BEAD Program also marks the first time the federal government is providing grants to states specifically for these purposes.

In addition, BEAD includes requirements—such as ongoing engagement with local stakeholders and marginalized communities, higher speed and reliability standards, and data collection to assess usage and impact of program funds—that are designed to correct some shortcomings of prior federal policy and establish consistency across states.

This brief breaks down the phases of the BEAD Program and outlines the requirements that states, territories, and federal agencies need to meet to access the funds.

What are the funds for?

Congress established the BEAD Program to address the persistent digital divide in the United States and outlined three associated priorities for use of the funds: building infrastructure, developing broadband action plans, and supporting programs to promote user adoption of new networks. The National Telecommunications and Information Administration (NTIA)—the agency within the U.S. Department of Commerce  that administers the program—clarified in its June 2022 Notice of Funding Opportunity that BEAD spending should prioritize:

Although delivering affordable fiber connections to unserved areas takes precedence, states may thereafter also apply funds to connecting underserved areas, which are those without access to 100/20-Mbps service; providing 1-gigabit-per-second symmetrical—meaning for both upload and download—connections to community anchor institutions such as libraries, schools, and hospitals; supporting digital skills training, workforce development, and provision of telehealth services; and promoting other broadband-related uses.

The NTIA is responsible for overseeing the distribution of funding to “eligible entities,” which are the 50 U.S. states and all U.S. territories, and it has established five minimum requirements for all BEAD-funded projects. They must:

Congress and the NTIA also outlined requirements for states and territories, including use of competitive award processes to select funded projects and submission of a series of documents addressing how eligible entities’ intended uses of BEAD funds would achieve the goals set forth in the Infrastructure Investment and Jobs Act.

How is funding allocated?

Congress split BEAD funding into three formula-based allocations: minimum, high-cost, and remaining funds. (See Figure 1.) The minimum allocation to states, Washington, D.C., and Puerto Rico will be $100 million each; other U.S. territories will receive minimum allocations of $25 million. The NTIA will allocate the remaining funds based on the ability of individual states and territories to provide broadband to unserved areas that meets the minimum project criteria outlined earlier.

High-cost allocations will target specific unserved areas—those where the cost of building broadband infrastructure is higher than the average cost of comparable construction in other unserved areas of the country. The NTIA will make these determinations based on factors such as geographic remoteness, low population density, challenging topography, and high poverty. Eligible entities’ total high-cost allocations are likely to differ significantly, reflecting the wide variation in these factors across states and territories. 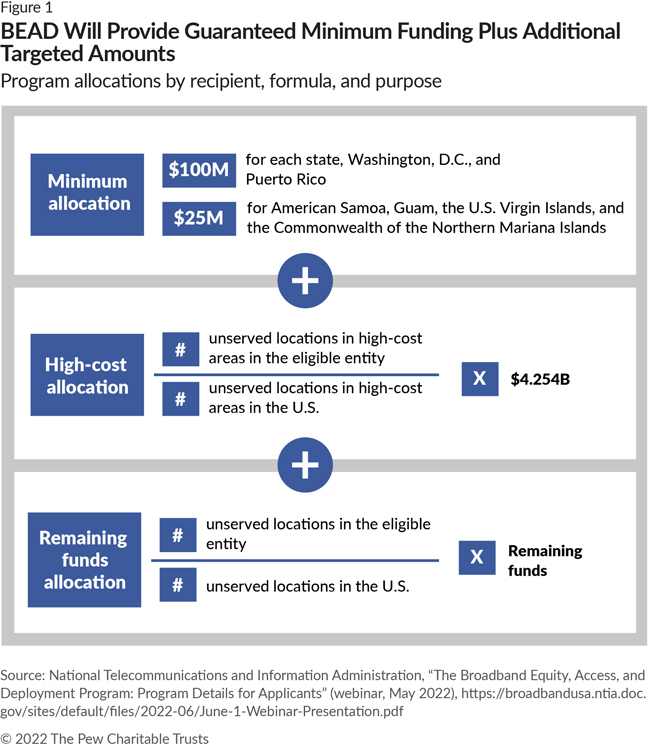 All funding allocations will be based on the FCC’s new broadband maps. An initial version of the maps, designed in accordance with updated federal requirements, came out Nov. 18, 2022. Eligible entities and the public will have an opportunity to challenge the information presented in the maps, a crucial accountability measure for ensuring appropriate distribution of funding.

NTIA Administrator Alan Davidson announced in September 2022 that the high-cost allocation formula would be set after eligible entities have had at least one opportunity to review and comment on the new FCC maps. Once the formula is announced, expected to be in early 2023, states and territories can submit their initial proposals for release of a portion of their allocated funds.

How will BEAD be implemented?

The BEAD Program has four phases: letter of intent and planning, funding allocation, initial proposal, and final proposal and implementation. Each phase is time-bound and includes requirements that states, territories, or the NTIA must complete or address before moving to the next phase. (See Figure 2.) This structure reflects research from The Pew Charitable Trusts and others which found that extensive coordination, planning, and data collection are needed to effectively use these funds—as well as the many other significant state and federal investments in broadband and digital equity during the pandemic—to achieve universal access goals. 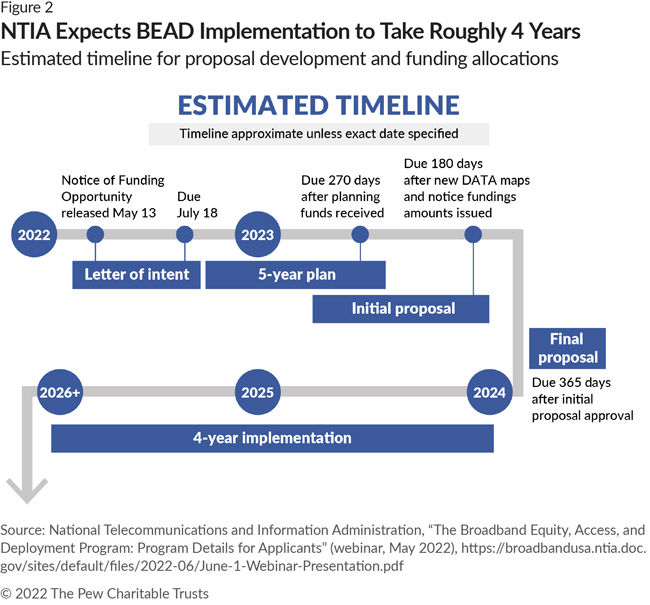 Letter of intent and planning

The first step in the BEAD process was for each eligible entity to submit to the NTIA a letter of intent (LOI) outlining a plan to participate in the program and identifying the office or agency that would receive and deploy the funds.

Each state and territory also could include in their LOI a request for an advance on their minimum allocations—up to $5 million for states, $1.25 million for territories—to be used as initial planning funds. Eligible entities that request planning funds must write a five-year action plan, due within 270 days of receipt of the funds, detailing their broadband goals and priorities. These plans also serve as comprehensive needs assessments that will inform later stages of implementation. States and territories may use planning funds for a range of pre-deployment activities, such as data collection, technical assistance to potential subgrantees, outreach support, and employee training, as well as project planning.

All eligible entities submitted their LOIs and planning fund requests by the July 18, 2022, deadline.

Initial proposals explain how each state and territory intends to bring a reliable, affordable broadband connection to all their residents. These proposals draw closely from the five-year action plans to detail how the eligible entity will award funds to achieve its broadband priorities. Proposals must specify:

To receive their remaining funds, states and territories must—no later than 365 days after approval of their initial proposal—submit a final proposal that explains:

Once the NTIA approves their final proposals, states and territories can begin implementing their program plans.

BEAD requires that states and territories:

Additionally, BEAD encourages, but does not require, that eligible entities:

States and territories will make a series of decisions over the next several years that will significantly affect their ability to achieve the funding requirements and goals outlined in BEAD. Early, active, and ongoing engagement with lawmakers, local communities, the private sector, researchers, and others will be critical to success, and eligible entities and their partners should consider that:

Over the next four or more years, eligible entities will deploy roughly $41 billion in funds to bring high-speed, affordable internet to millions of unserved households throughout the country. This investment will touch nearly every aspect of the broadband space and will bring broadband access to more unserved and underserved communities than any previous effort, while also providing much-needed support for broadband adoption programs and community anchor institutions.

To meet the requirements of the BEAD Program, states and territories are already scaling up their broadband programs to ensure proper data collection, planning, stakeholder engagement, and funding decisions. And although this investment still will likely not be enough to achieve universal access, combined with other federal broadband funding, it will bring the nation closer to closing the digital divide than ever before.

Kathryn de Wit directs Pew’s broadband access initiative, which works to accelerate efforts to connect millions of Americans to affordable, reliable high-speed internet. In addition to working with policymakers, researchers, and other stakeholders to improve policy outcomes, de Wit’s work also includes addressing research gaps and bringing together stakeholders for data-driven discussions about how to ensure that every American benefits from universal connectivity.