What Policymakers Should Know About Lifeline Participants

What Policymakers Should Know About Lifeline Participants

In July 2021, the Federal Communications Commission's Wireline Competition Bureau released its report on the state of the Lifeline marketplace. The aim of the report was to identify areas for FCC consideration regarding the continued transition of Lifeline from a program that primarily supports voice services to one with a greater focus on supporting broadband Internet access service. Unfortunately, there are three critical questions I noticed the FCC’s Lifeline report did not address:

1. Perspectives on Affordability of Service

Low-income Americans pay too big a portion of their incomes for telephone service.

Other surveys also illuminate the affordability issue for low-income Americans. A 2021 national survey of low- and lower-middle-income households asked these households what they pay for service and to identify monthly service fees that would be too expensive for their budgets. That survey found a range of perspectives on affordability:

According to BroadbandNow, entry-level broadband plans start in the range of $40 to $50 per month. Carriers such as Verizon, Comcast, Spectrum, and AT&T have promotional rates that start at $40 or $50 per month; Cox starts at $30. After a year, Cox’s plan increases by $15 to $45 per month and AT&T’s rate increases $20. This means that low-income households, to be comfortable paying for monthly service, would require a subsidy that is far greater than Lifeline’s current $9.25. For many, $30 might suffice in that it would put a $50 monthly plan within reach (with the household covering the remaining $20). Other households might need to use a $30 subsidy in conjunction with a discounted offer in order to have service without making outlays themselves. This suggests that these consumers will greatly benefit from being able to combine their Affordable Connectivity Program and Lifeline benefits for the same service.

The other point to note is that low-income Americans pay a significant portion of their income for telephone service. The FCC Lifeline Marketplace report notes that the Commission would consider affordability in the context of “the extent to which voice and broadband service expenditures exceed two percent of low-income consumers’ disposable household income.” Analysis of the Census Bureau’s Consumer Expenditure Survey (CES) shows that households whose annual incomes are below $15,000 pay about $500 per year for telephone service—or 3.3 percent of their income. Households in the $15,000-to-$30,000 income range pay $660 per year for telephone service, or 2.2 percent of their income (using the upper range as the denominator). For households in deep poverty (whose median incomes are only $2,400 annually), phone service might be as much as 15 percent of their gross incomes (assuming such households pay less than $500 per year). For all Lifeline-eligible households, assuming a cell phone bill annually of $550 (or about $45 per month), service is close to 3 percent of gross income.

All of this is to say that many poor households are likely to purchase phone and internet service at the expense of other items.

2. The Lifeline-Eligible Population and Adoption of Digital Tools

Analysis of American Community Survey (ACS) data for 2019 shows that just more than half of Lifeline-eligible households have a wireline high-speed internet connection at home, nearly two-thirds have a cellular data plan, and nearly all have telephone service. The analysis herein builds on two ACS questions, one that specifically asks about whether a household subscribes to cable, digital subscriber line, or fiber-optic service. The other asks about whether a household has a mobile data plan for a computer or cell phone. The ACS does not have a question that would capture fixed wireless service, which is a growing market segment. The wireline/wireless dichotomy here is not intended to reflect technology bias but rather draw a focus to service attributes of wireless and wireline. Wireline services typically have higher speeds and data caps than mobile broadband. If fixed wireless service plans are similar to wireline ones—in reliability and with sufficiently fast speeds and comparably generous data allotments—they may have functionality that is similar to wireline plans (e.g., that permit largely unconstrained video streaming for educational applications).

The table below is analysis of 2019 American Community Survey data that shows technology adoption figures for Lifeline-eligible and other households at specified income thresholds.

There are stark differences in technology adoption among the lowest-income Americans and the majority (60 percent) of American households whose annual incomes are more than $50,000 (according to 2019 ACS data). Most of these households (75.1 percent) have both a wireline broadband subscription and a cellular data plan. That is more than twice the rate (36.3 percent) for low-income households. At upper-income levels—the 15 percent of homes whose annual incomes exceed $150,000—85.1 percent had both wireline and cellular data subscriptions. Combining the two lowest income categories shows that 44.7 percent of U.S. households whose incomes are $50,000 or less have cellular data plans and wireline broadband—far below the 75.1% figure for those whose incomes are above that threshold.

Nearly all (97.8 percent) Lifeline-eligible households have telephone service. If USAC figures are reliable, about one-fifth of eligible homes participate in the Lifeline program (although that may be lower with expanded usage of SNAP in 2020). Since Lifeline participants still overwhelmingly chose to apply the subsidy to mobile telephone service, few of the 54 percent of Lifeline households with wireline broadband likely have this service subsidized by Lifeline. As a result, only about 17 million of the 31.7 million households who qualify for Lifeline have wireline broadband service.

The “device gap” is contributing to the digital divide

3. Lifeline and Other Benefit Programs

The number of Lifeline subscribers fell from 18 million in 2012 to under 12 million in 2016. The ensuing four years saw further decreases in Lifeline participation, driven by administration changes that resulted in making signing up for the benefit more burdensome for potential beneficiaries. By 2021, 6.5 million households subscribed to the Lifeline program. Given a pool of 33.2 million households that qualify for the benefit, that is a participation rate of just 20 percent.

Not only has Lifeline participation fallen in recent years, but participation rates in Lifeline compare poorly with other programs. A Bureau of Labor Statistics analysis of 2014 data found that 84.1 percent of eligible families received Medicaid and that 51.6 percent of eligible families received Supplemental Nutrition Assistance Program (SNAP) benefits. The Center on Budget and Policy Priorities, in comparing the number of people using SNAP with those at 130 percent of the poverty line (or less), indicates that SNAP participation rates rise in times of economic stress, increasing to as much as 70 percent. At the same time, Lifeline’s participation rate exceeds those for housing assistance (21.8 percent) and Supplemental Security Income (9.9 percent).

This data points to a need for outreach to eligible households so that they are aware of the benefits of Lifeline and the Affordable Connectivity Program. 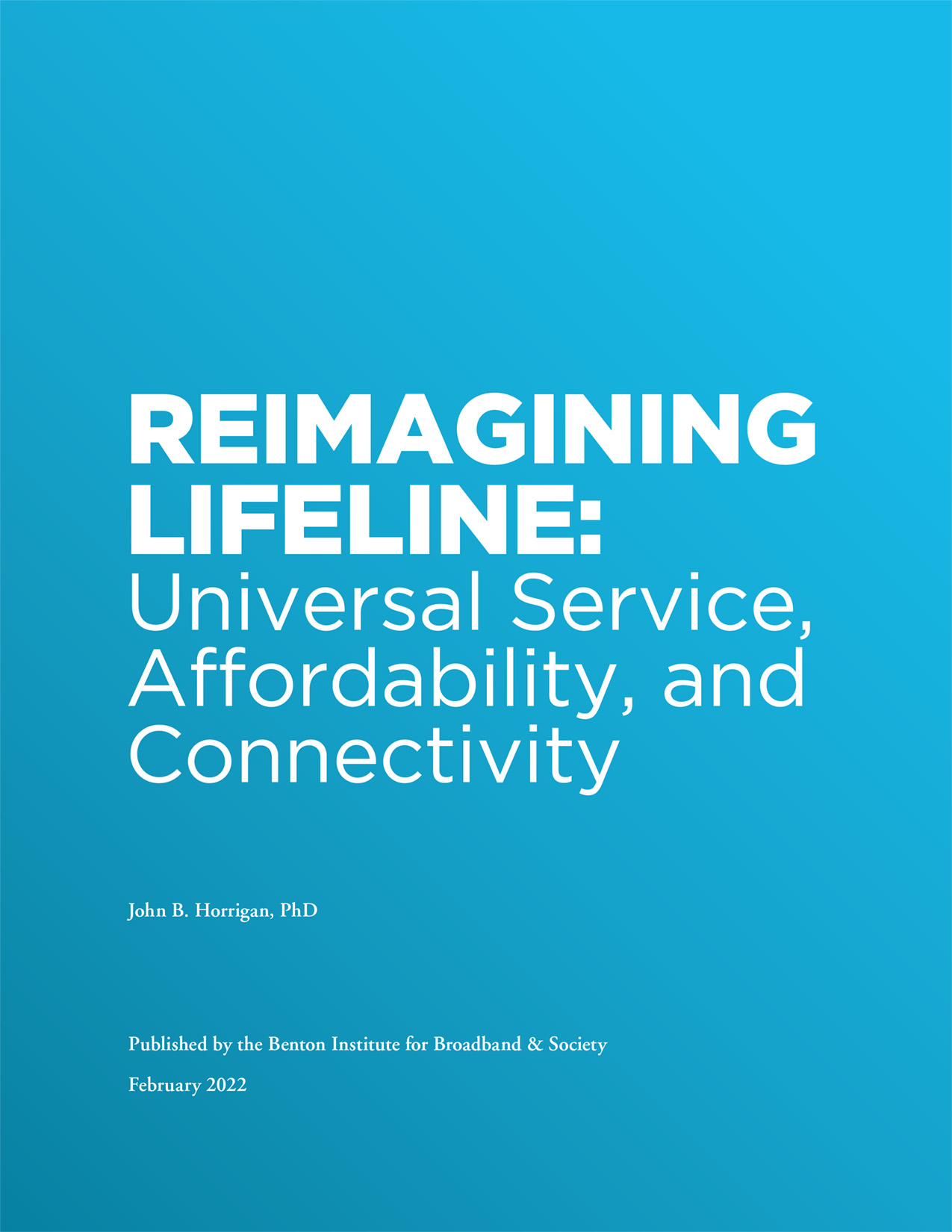 [For more ideas on the future of the Lifeline program, see Reimaging Lifeline: Universal Service, Affordability, and Connectivity]

John B. Horrigan is a Benton Senior Fellow. He is a national expert on technology adoption, digital inclusion, and evaluating the outcomes and impacts of programs designed to promote communications technology adoption and use. Horrigan served at the Federal Communications Commission as a member of the leadership team for the development of the National Broadband Plan. Additionally, as an Associate Director for Research at the Pew Research Center, he focused on libraries and their impact on communities, as well as technology adoption patterns and open government data.