On September 17, TPRC and the Benton Institute for Broadband & Society will present the 2022 Early Career Scholar Awards recognizing scholarship in the area of digital inclusion and broadband adoption. Richard Cole Campbell is this year's runner-up.

Today, broadband is a crucial and fully integrated technology of our modern economy. Just as electricity transformed our society, broadband has affected all aspects of our lives—including education. Our teachers regularly assign homework that requires an internet connection to enhance their students’ experience. Similarly, students using broadband have embraced the ability to better complete assignments, study, and otherwise supplement their education.

As broadband becomes more and more important for students to be successful, we need to know how differences in availability affect their achievement. The COVID-19 pandemic has been instrumental in highlighting the disparities in access faced by vulnerable members of our community, and subsequently school districts across the nation have attempted to right this wrong by providing students with free or subsidized internet access.

How do some students’ achievements compare to their more well-off peers with fancy 1 Gb fiber connections? How the speed and quality of a broadband connection affect student achievement is an open and relevant policy question. This is a question that we need to answer in order to better serve students and their families. If students who have access to faster, higher-quality connections are better able to meet the requirements of a 21st-century education, disparities in access are an unacceptable policy failure.

Now faced with a crucial question, how would we answer it? Consider the following thought experiment. Suppose we could randomly build out fiber-optic broadband to different parts within a neighborhood and then compare a student’s test scores before and after fiber became available to the students that didn’t get access. This would mimic a “natural experiment” with which we could assess the effect of fiber access on student achievement in a framework similar to how pharmaceutical companies assess the efficacy of their drugs.

As it turns out, the gradual build-out of fiber over the last decade has roughly mirrored this “natural experiment,” and subsequently serves as an informative opportunity for policymakers and researchers studying broadband. Subsequently, my research leverages this fact to ask how fiber affects students’ achievement in grades 3-8 in North Carolina. 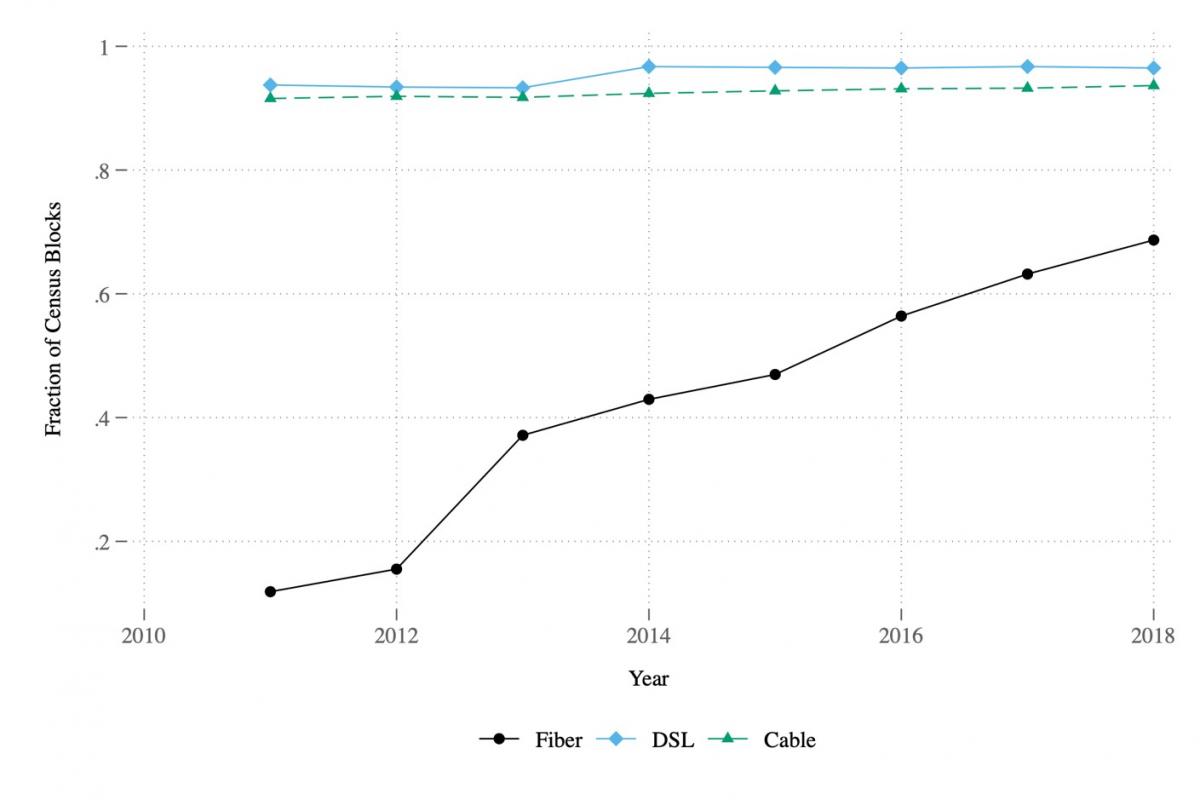 Figure 1: The figure shows the fraction of census block groups in North Carolina with access to either DSL, Cable, or Fiber from 2011-2018. Author’s calculations using data from the FCC Form 477 data.

Without a doubt, fiber access has gradually expanded over the last decade, especially when compared to common technologies such as Cable and DSL (see Figure 1). Over the last decade, the fraction of census blocks with access to fiber rose from less than 20% of blocks in 2011 to more than 65% of blocks in 2018. Furthermore, upon the arrival of fiber, residents experience drastic changes in the maximum download speeds available to them (see Figure 2). On average, fiber offers speeds more than 300 Mbps above the baseline technology in an area, and in many cases nearly doubles existing offered speeds while simultaneously improving reliability. 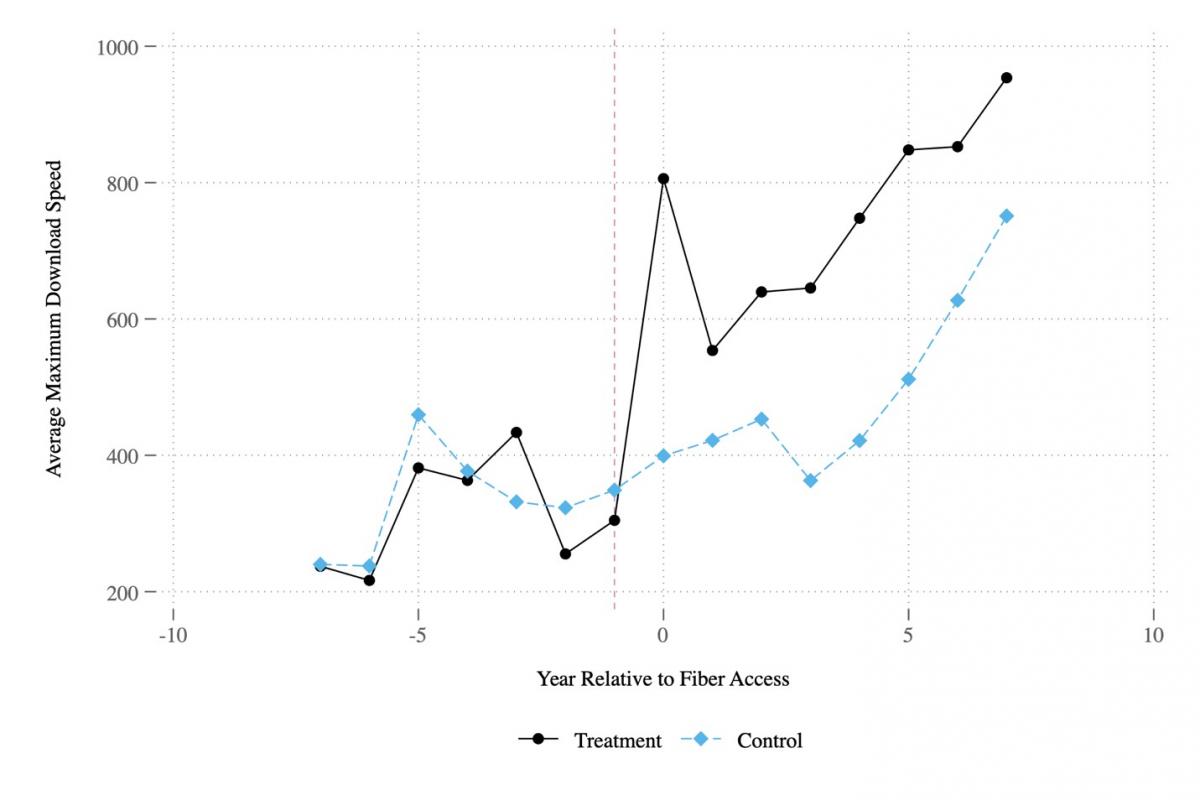 Figure 2: The figure shows what happens to the average maximum download speeds offered in North Carolina for blocks that eventually gained fiber versus those that did not. The x-axis indicates the year relative to when a block got access, where a block gained access at time 0. Author’s own calculations using data from the FCC Form 477 data.

What happens to the achievement of students who live in areas where fiber is offered? It turns out that not only does internet access matter, but the speed of the connection does as well! Six years of exposure to fiber for students in grades 3-8 increases their standardized math and reading scores by about 2.3 and 1.1 percent of a standard deviation respectively (see Figure 3). To put this in perspective, lowering a student’s class size by one student would produce a similar effect, yet would raise spending per pupil by about $600 a student. While these effects seem small, it’s worth bearing in mind the natural expansion of fiber costs nothing to taxpayers, but still produces beneficial changes in student outcomes. 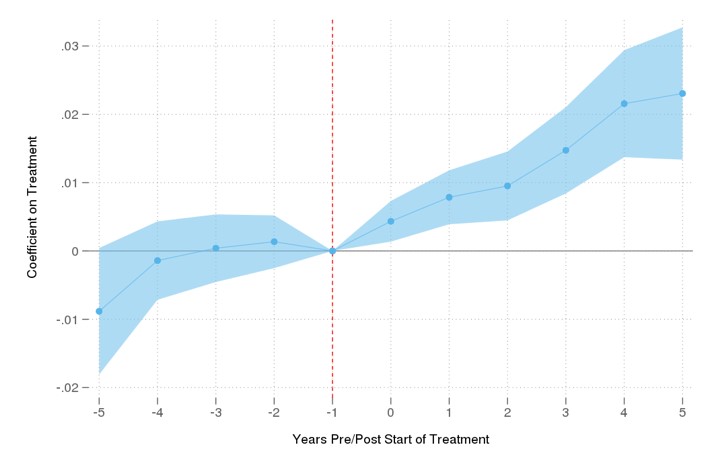 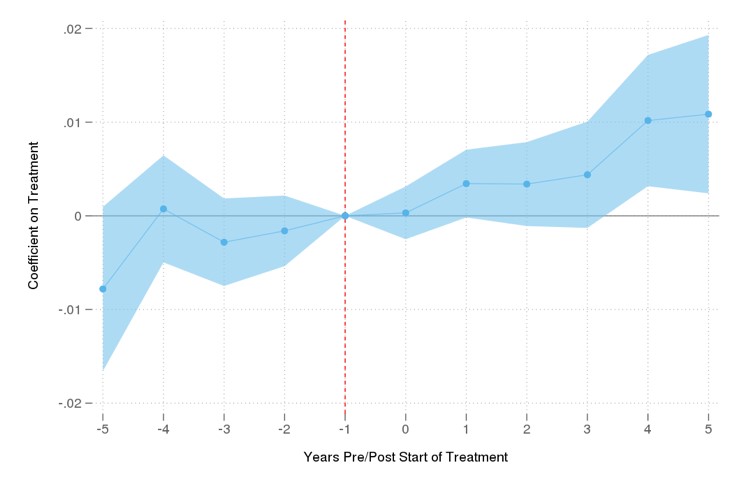 Figure 3: The figure shows the effect of fiber access on math and reading test scores for students in North Carolina. The x-axis indicates the year relative to when a student obtained access, where a student gained access at time 0. Student data comes from the North Carolina Education Research Data Center.

In hindsight, it seems obvious that high-speed internet access would be beneficial for students, so what’s going on here? A few different stories might explain why students benefit so much. First, fiber access increases employment by a little more than 5% in counties that were exposed to fiber. Accordingly, we might imagine that increased employment could explain why students do better if families are able to afford tutors or put more resources towards their children’s education.

Second, fiber affects competition between internet providers through the quality of the connection and through prices. In fact, by competing for consumers, internet providers are likely to lower prices which could induce some families not previously paying for internet to take up a service (not necessarily fiber) if it’s now more affordable. Even in the case that prices don’t adjust the maximum speeds of other technologies increase by, on average, roughly 20% or 88 Mbps in response to fiber. Accordingly, families that don’t subscribe to fiber may still benefit if incumbent firms adjust their plans to compete with the arrival of new technology.

Last, and perhaps the most direct explanation, students use this new technology to help themselves. Following the arrival of fiber, searches on Google for Khan Academy, a website that offers free educational material including instructional videos, increase significantly. While this isn’t perfect evidence, it suggests that students may be using their newer and better internet connections to help them meet their educational needs.

This research suggests that broadband is a key piece of modern education. Students benefit greatly from broadband access and in particular reliable, fast broadband. Policymakers should strive to equalize both availability and take-up of fiber-based broadband. Failure to do so could unduly restrict the educational outcomes with limited or no broadband access or those too poor to afford a subscription for broadband service.

You can view the current version of this research paper here.

Richard Cole Campbell is a Ph.D. candidate in Economics at the University of Illinois at Chicago, specializing in applied microeconomics and inequality. His research interests tie student achievement to broadband availability, while other work seeks to understand larger trends in U.S. inequality.