At the early days of my doctoral study and fellowship at the Annenberg School for Communication and Journalism, University of Southern California (USC) over two years ago, I conducted a 10-month field research to understand the dynamics of digital access and use among people experiencing homelessness in Los Angeles. And it was only 6 months after I had lived and worked in Singapore – a global city-state with high tech infrastructure and a tech-savvy population – and then traveled to various cities in the UK and Western and Eastern European countries before leaving for USC. The experience in the City of Angels was not similar to many other cities in the world that I had visited: It was the first time I witnessed a massive number of houseless individuals and families residing on the street and struggling to sustain their lives on minimal sustenance and digital means. Many of them battled every day to protect their phones from being stolen, lost, or broken due to their precarious living conditions. People living on the street and in transitional housing walked a long distance to find a public charging outlet or else had to rent it in a nearly mobile phone shop. Technology, to them, is more of a luxury than a necessity. Without a doubt, the instability of digital access is an issue for this population. Similarly, solving access problems, providing underserved populations digital devices and infrastructure, is oftentimes the first step in many digital inclusion efforts. However, do people in the community – men and women – all have access to the technology equally? Is having access alone enough to help improve the livelihoods, connectivity, and well-being among all? Once having access, how do people, especially more vulnerable individuals like women, use technology to empower themselves? How can technology be relevant to women’s needs? As my project progressed, I realized that social exclusion is an issue facing homeless women, and that positive digital uses can help them improve their lives.

The concerns with social exclusion in the digital world were at first mainly seen as the “digital divide” interpreted as the access to (or lack thereof) technological resources. However, this somewhat simplistic approach was later challenged by scholars because a single focus on digital access is not sufficient to understand the various forms of exclusion facing marginalized users given the limited social resources afforded to them, either on the digital platforms or facilitated by technological tools.[i] The focus on the provision of technological resources has thus been expanded to include a wider range of social resources (e.g., physical and human resources) required for social inclusion defined as the capacity to achieve social opportunities to participate as a full member of the society and to gain well-being freedom and agency freedom.[ii]

Enhancing social inclusion is an answer for what can be a next step after digital access and if policymakers and practitioners are to realize digital inclusion in full.

My study aims to highlight the various ways information communication technologies (ICTs) facilitate homeless women in achieving social inclusion. It focuses on female adults living in tents/encampments and/or transitional housing in Skid Row – an urban ghetto located in downtown Los Angeles. The settlement, covering an area of about 50 city blocks with 8,000–11,000 residents, has high poverty and crime rates, and reduced access to urban services and amenities. Recently, housing unaffordability, along with many other individual and structural problems, have led to a surge in the number of homeless women, working adults, and families.[iii]

Here are the major findings of my study:

Living in Skid Row was especially challenging for women as they resided in unlocked tents/encampments on the sidewalk with no private facilities for personal care. Many women experienced depression, lack of sense of security, and even abuse by their own romantic partners and/or other men. They also encountered social discrimination from their wider family/friend circles and people in the society looking down on them as “deviant women” and drug addicts who could not afford a home nor take care of themselves. Many did not dare to disclose their status as homeless.

These experiences illustrate the complexity of social exclusion that homeless women face – some of the most vulnerable people in American cities. Their location at the intersections of gender, homelessness, social status, and problematic mental/physical health jeopardizes their wellbeing and deprives them of myriad social opportunities such as access to healthcare, education, housing, and employment.

Although access to digital technologies was unstable given their precarious lives on the street, homeless women did have access to ICTs such as mobile phones, personal laptops/tablets, radios, and public computers available in public libraries in Los Angeles. Commonly used devices were the low-end smartphones offered by either a government assistant program (e.g., California’s Lifeline program) or a telecommunications company, providing the user with unlimited minutes and limited data allowance. Many people used their state/county-assisted funds (e.g., General Relief) to purchase their smartphones and mobile internet. 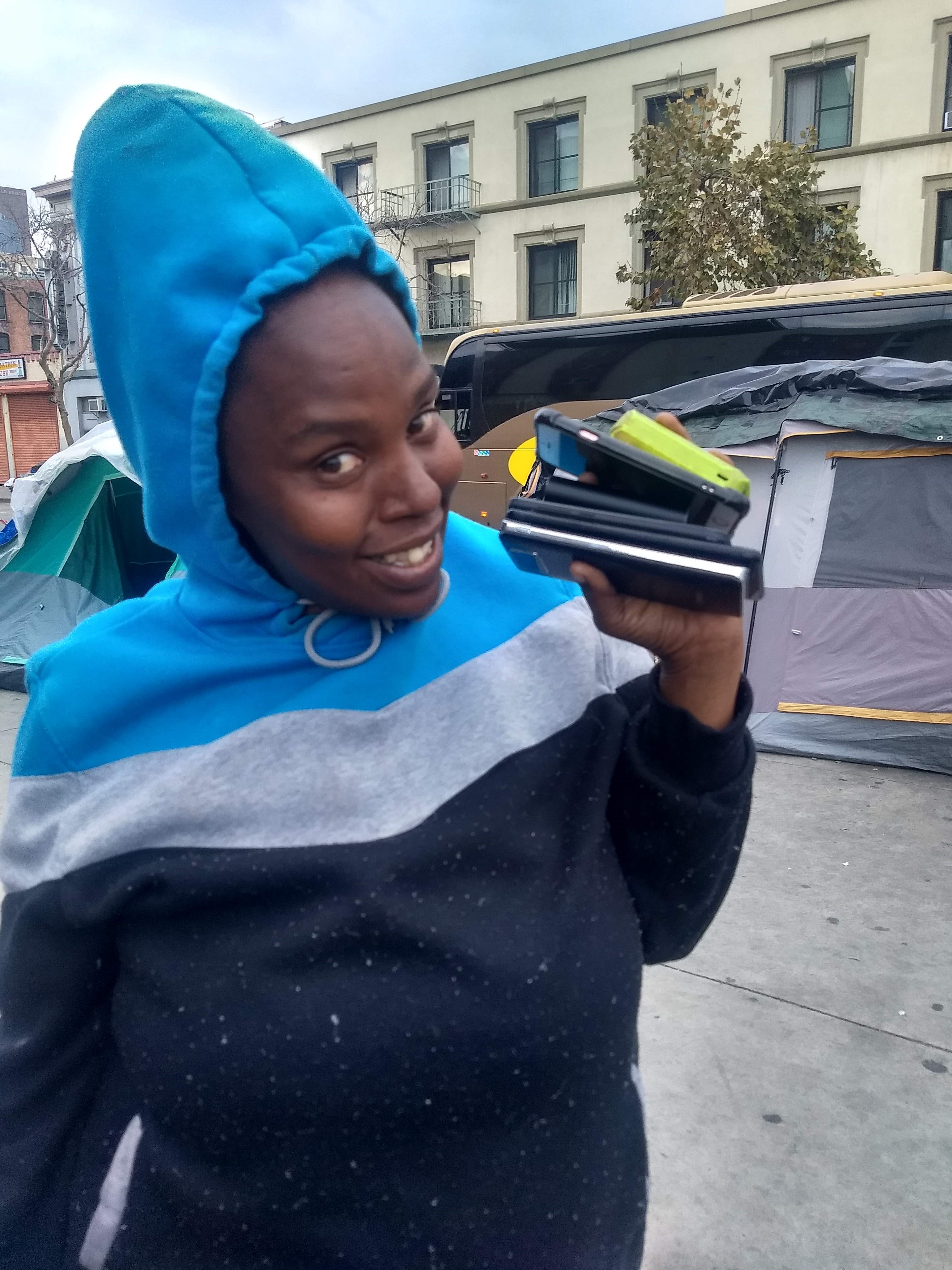 When granted access, they utilized the technology to facilitate their lives and coping strategies against social exclusion. Particularly, they tapped into technology resources to (i) enhance their psychological well-being and professional skills, (ii) seek employment and housing opportunities, (iii) present an extended identity online, resisting the dominant discourse seeing them as deviant, unwanted women, and (iv) engage in social change efforts.

My ethnographic fieldwork and interviews show that homeless women tapped into digital resources necessary and available to them to stay connected with supportive systems, challenge the status quo, and seek employment and housing opportunities – that is the role of ICTs in mediating the women’s agency and autonomy.[iv] These are real efforts made to try to improve their capacities and change their lives. Certainly, one can argue that it is very difficult for marginalized groups to change their lives or the conditions that lead to their marginalization, and that it is harder to uproot some stigmas (e.g., chronic health conditions) than others (e.g., homelessness, poverty). However, the capacity to effectuate change, or one’s efforts to make change, is valuable in and of itself, regardless of outcomes.

My study suggests the need for research, practical projects, and policy efforts related to homelessness, technology and digital inclusion to go beyond the notion of digital access to consider the role of social inclusion in helping homeless people, especially homeless women, achieve equal social opportunities and full participation in the society using digital means. Digital access per se is not enough to address the barriers women face: For digital access to become totally “inclusive,” it must go hand in hand with social inclusion efforts to create a conducive environment for the vulnerable group to appropriate digital and social opportunities.

The first step might be to prioritize digital access to houseless women. The next step can be to make digital inclusion and digital literacy efforts more relevant to homeless women and their specific needs. Also, technological projects may want to partner with non-technological projects (e.g., art classes; sexual harassment and feminine health training projects for homeless women), perhaps by digitizing their work so as to enhance the impacts of technology on the lives of female groups and make the technology relevant to them.

Certainly, technology is still not something to be taken for granted for various underserved populations in America as homeless women. Lack of digital access, poor technological maintenance, and digital illiteracy is still a thing. The poorest and least educated women might seriously lack stable digital access or have limited digital skills. Therefore, for practical projects that aim to empower these marginalized users, it is most beneficial to develop a holistic approach that provides them with digital skill training and affordable access to digital resources, besides the efforts needed to promote social inclusion practices for women to fully participate in social and digital processes. It is also crucial to guide them in managing potential benefits and risks of their mediated identity work and efforts invested in the process of countering social exclusion using digital resources. With the right approach, technology definitely can be better deployed at the sidewalks, shelters, and supportive housing, to cater to the houseless community and its most vulnerable members!

Hoan (Sarah) Nguyen is a doctoral researcher and Graduate Fellow at the Annenberg School for Communication, University of Southern California (USC). She broadly studies social impacts of information communication technologies, urban digital infrastructure, technological innovation and entrepreneurship. She presented in prestigious conferences and published in various premier scholarly journals. Hoan has also been honored with several awards including the ProSPER.Net Leadership Program Fellowship Award (2017) by United Nations University, Institute for the Advanced Study of Sustainability, the Yale M. Braunstein Student Paper Award (2019) by Pacific Telecommunications Council, and the Charles Benton Early Career Scholar Award (2020) by Benton Institute @ TPRC Research Conference on Communications, Information, and Internet Policy. She worked as a research associate at Nanyang Technological University, Singapore, before joining USC. She grew up in Vietnam and loves to travel the world and explore different cultures. She strives to give back to and make impacts on underserved communities through her research, advocacy, and entrepreneurial work.