FCC: Broadband Market is on the Cusp of Generational Change

FCC: Broadband Market is on the Cusp of Generational Change

On Friday, December 30, 2022, the Federal Communications Commission released its third Communications Marketplace Report. In the RAY BAUM’S Act of 2018, Congress requires the FCC to assess the state of competition in the communications marketplace. Every two years, the FCC must evaluate competition to deliver voice, video, audio, and data services among providers of telecommunications, providers of commercial mobile service, multichannel video programming distributors, broadcast stations, providers of satellite communications, internet service providers (ISPs), and other providers of communications services. The FCC last completed a marketplace report in 2020 under then-Chairman Ajit Pai. Here we focus on the FCC's findings concerning broadband, a market, the commission notes, that is "on the cusp of generational change" because of the $65 billion that the Infrastructure and Investment and Jobs Act is investing in broadband adoption and deployment throughout the country.

I. Overview of the Broadband Marketplace

As of December 2021, there were 2,201 entities of varying sizes and deployment footprints that reported providing fixed broadband technology services to residential consumers at speeds exceeding 200 kbps in at least one direction. This is an increase of approximately 10% since December 2018 (the number of providers in urban areas and rural areas increased by approximately 12% and approximately 10%, respectively).

Cable broadband service delivers broadband using infrastructure originally deployed for cable television. This service is provisioned over coaxial cables that deliver cable TV programming and internet service on separate channels (or frequencies). Currently, most providers of cable broadband service have deployed a hybrid fiber-coaxial (HFC) technology that transmits signals over fiber from the provider’s facility to an optical node near the consumer. These providers typically use coaxial cable to send the signal from the optical node to the customer’s end location. Data Over Cable Service Interface Specifications 3.1 (DOCSIS 3.1, if you're scoring at home), the latest cable standard deployed, is deployed to census blocks containing approximately 78% of U.S. households. In terms of speed, the weighted mean advertised download speed for cable broadband subscribers was approximately 178 Mbps as of October 2020, and participants, on average, experienced speeds that met or exceeded their advertised download speed. The weighted mean maximum advertised download speed for residential cable broadband connections was approximately 325 Mbps. Comcast and Charter almost exclusively provide fixed broadband through cable.

Copper, including traditional DSL, is the oldest last-mile broadband technology still in use. It is commonly used by traditional telephone companies and transmits data via a modem over traditional copper telephone lines to consumers. Although widely available because it is built on the existing telephone network, this service is generally slower than other types of broadband services. Copper-based services, such as DSL service, are limited by the distance between the telephone provider’s central office and the consumer’s home such that the speed of the service decreases as the distance between these two endpoints increases. The weighted mean advertised download speed for residential DSL subscribers was 21 Mbps; however, participants, on average, experienced speed that did not meet their advertised download speed. The weighted mean maximum advertised download speed for residential DSL connections was approximately 30 Mbps. Since 2020, residential connections to copper services fell from 17.9 million to 15.2 million, a reduction of almost 15%. AT&T provides broadband access with a combination of technologies, covering approximately 95% of its service area with DSL.

The FCC notes that as broadband speeds increase, so do prices across cable, DSL, fiber, and fixed wireless technologies.

The FCC looked at pricing speed, data caps, latency, packet loss, churn, and whether consumers have access to multiple providers.

In November 2022 Consumer Reports research found that among the 18,359 consumer bills on which an internet price could be identified, the median cost of high-speed internet service was $74.99 per month. Approximately half of the households were paying between $60 and $90 per month. The FCC's own research has similar findings. Looking at the stand-alone plans of the top 11 fixed broadband providers in the United States, the FCC finds:

FCC research presents an actual speed for broadband providers, defined as the median speed experienced within a specific speed tier. Overall performance is calculated by determining the ratio of the median speed for each tier to the advertised tier speed and then calculating the weighted average of these based on the subscriber count per tier. The analysis shows that consumers’ actual broadband service speeds for most providers are close to or exceed the advertised speed. Of the nine 12 provider/technology configurations included in the communications market report, nine met or exceeded their advertised download speeds, two reached at least 90% of their advertised speed, and one performed below 90% of its advertised download speed.

Consistency of speed may be more important to consumers using applications such as video content that are both high-bandwidth and sensitive to variations in actual speed. FCC research considers two metrics of speed consistency. The first metric is the percentage of a provider's sampled panelists who experience an actual monthly average download speed that was greater than 95% of the pertinent advertised speed. The results show that consumers’ actual broadband service speeds for cable and fiber provide more consistent speeds than DSL. Cable and fiber provided speeds equal to or better than 95% of their advertised speeds to 89-98% and 53-98% of their subscribers, respectively. However, between 3% to 75% of DSL subscribers experienced speeds greater than or equal to 95% of their respective provider’s advertised download speeds during peak hours.

Many fixed providers offer service plans that enforce a data cap, which means those who subscribe to that plan will be limited in the amount of data they can use each month. Those plans could be less expensive for consumers than unlimited plans depending on their data usage. Once a customer reaches their data cap, they are either charged for additional data they use or are subject to their speeds being reduced or throttled.

In 2022, research conducted by BroadbandNow found:

Latency measures how much time it takes for your computer, the internet, and everything in between to respond to an action you take (like clicking on a link). FCC research found that differences in median latency among services offered by wireline providers are relatively small. Median latencies ranged from 8 ms to 28 ms. Measured DSL latencies (between 21 ms to 37 ms) were slightly higher than those for cable (12 ms to 26 ms) and median latencies for fiber were lowest (8 ms to 13 ms).

A packet is lost if the latency exceeds three seconds or if the packet is never received. A 1% standard for packet loss is the point at which highly interactive applications such as Voice over Internet Protocol (VoIP) experience significant degradation in quality. Fiber has the lowest packet loss (0% to 5%), while DSL has the highest packet loss (4% to 8%).

Customer churn is the percentage of customers who stop paying for a service or product over a specific time period. Companies aim for lower churn rates because higher customer churn leads to a reduction in revenue. Many factors impact customer churn in the fixed broadband market: contract length, automatic payment options, bundled services, quality, and competition.

Subscribers receiving higher quality services are more likely to be satisfied and thus less likely to switch to a new provider. For the United States and Europe, an Analysys Mason survey indicates that “the benefits of higher speeds in terms of churn reduction grew between 2019 and 2020,” and in the United States, subscribers with higher download speeds are less inclined to churn due to higher satisfaction and reliability scores.

Using year-end FCC Form 477 deployment data from 2018 to 2021, the commission assesses the number of fixed broadband provider options available to consumers across three minimum speed thresholds—25/3 Mbps, 100/20 Mbps, and 940/500 Mbps. The FCC analysis is reflected in the chart below. 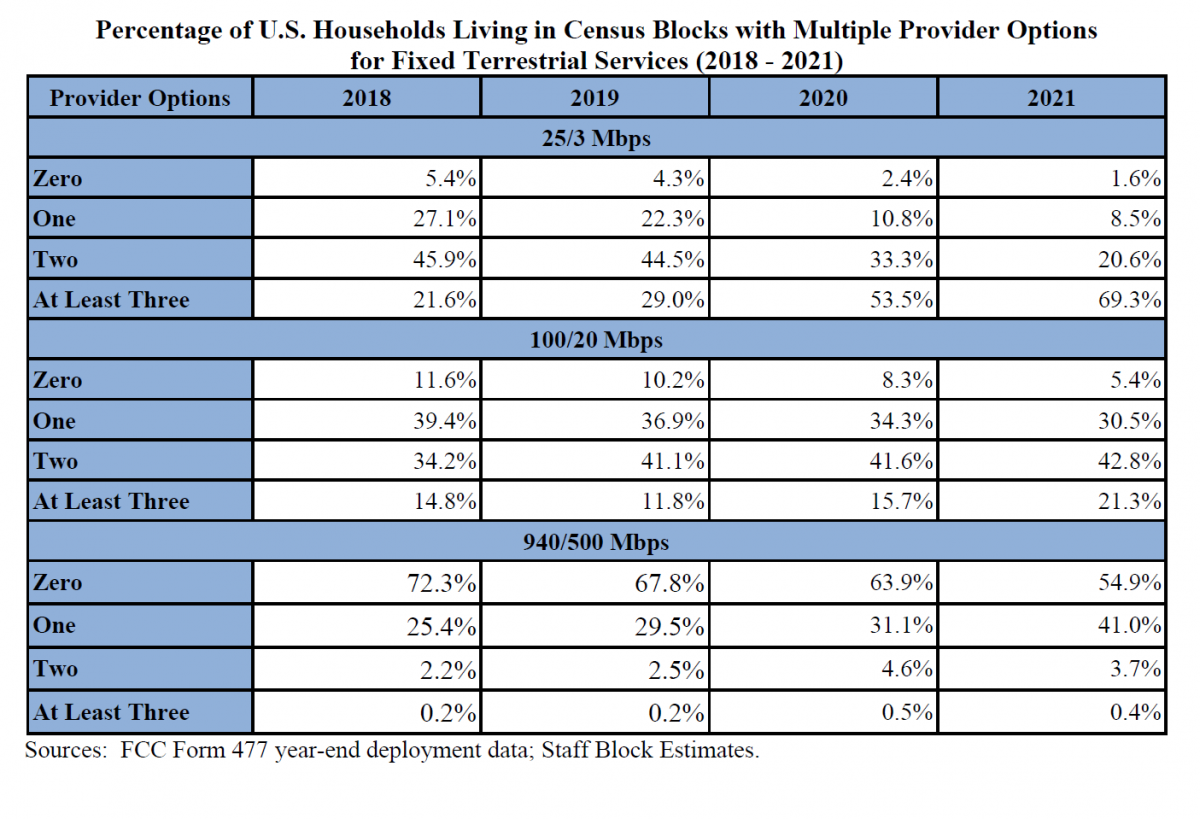 Over the next two years, the FCC expects to continue efforts to connect every American to an affordable, high-speed broadband connection through its Universal Service Fund (USF) programs including:

Jan 18—By the Numbers: Understanding and Driving Enrollment in the Affordable Connectivity Program (Benton Institute for Broadband & Society)