As we highlighted last week, 2020 presidential candidates are starting to release policy proposals targeting the digital divide. This week, researcher John Horrigan wrote that the digital divide isn’t just a rural issue. And not just a deployment issue. His observations have sparked a stimulating conversation -- and could be shifting the national dialogue.

There has been a rush among major 2020 presidential candidates to offer policy proposals to reinvest in rural America, and broadband plays a key role. Senator Elizabeth Warren's (D-MA) plan includes a "public option for broadband" and a proposal to create an Office of Broadband Access that will manage an $85 billion federal grant program. Senator Kirsten Gillibrand's (D-NY) plan includes having the White House be a funding partner for communities and a call for a $60 billion investment to connect all rural Americans. And this week, South Bend Mayor Pete Buttigieg (D-IN) joined the club, offering his $80 billion Internet for All initiative.

The Washington Post noticed the trend and published an editorial on Sunday discussing the challenges of closing the digital divide, challenges Benton readers will quickly recognize: broadband deployment data and mapping, to whom subsidies flow, and allowing municipalities to build and operate their own broadband networks.

It’s exciting that the importance of broadband deployment has entered the national conversation. But we need to address the unique challenges of the divides in rural and urban communities -- and understand the difference between access and adoption.

John Horrigan, a senior fellow at the Technology Policy Institute, wrote an analysis of the Census Bureau’s American Community Survey broadband-related data. “What good is a broadband network if you can’t afford to subscribe or don’t know how to use it?” he said. “By these measurements, the U.S. has a long way to go -- not just in rural areas but in urban ones as well.” 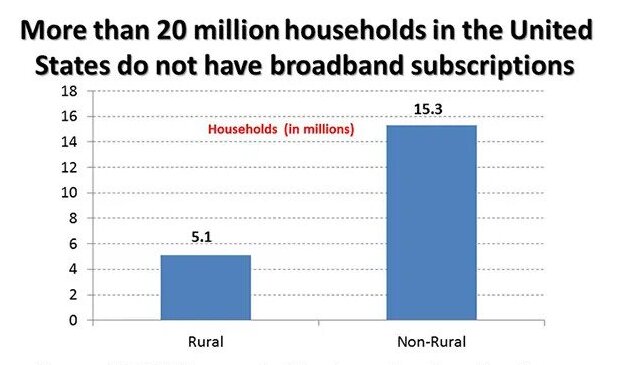 At the Federal Communications Commission, the digital divide is predominantly framed as a problem of network deployment in rural areas. But that focus can mean adoption gets overlooked. Horrigan said, “Ensuring the ubiquity of high-speed networks is a laudable goal. But if a lot of people are not subscribing even when networks pass their residences, that’s a different problem.”

Also see Horrigan’s How Do We Measure Broadband? published by Benton this week

Horrigan’s analysis shows that if we look at the digital divide nationally -- urban and rural -- we see that both deployment and adoption need to receive adequate attention in policy proposals.

As Horrigan put it:

Remember: Cost is the Biggest Barrier to Broadband Adoption

Horrigan also contributed to a 2015 Pew Research Center report on home broadband use that found that cost is the substantial challenge for many non-users. “In some form, cost is the chief reason that non-adopters cite when permitted to identify more than one reason they do not have a home high-speed subscription. Overall, 66% of non-adopters point toward either the monthly service fee or the cost of the computer as a barrier to adoption.”

Cost continues to be a major barrier to broadband adoption. Successful interventions will need to address “ability to pay” rather than “willingness to pay.” While all low-income individuals and families who participated in this study understood the value of broadband connectivity, most explained that cost remained the most significant barrier to adoption. Successful digital inclusion efforts should recognize the role that persistent poverty plays in shaping people’s abilities to access and use computers and the Internet. The findings suggest that more research is needed to understand budgeting issues and other concerns related to people’s experiences living in poverty.

Rhinesmith visited eight low-income communities across the country for his research. Almost every person he spoke with mentioned that they would be able to pay $10-$15/month for low-cost internet access. But anything more costly would be challenging for them to afford. Often community members said that, even at $10/month, they would have to choose between paying for the internet or for food.

Rhinesmith explored the “willingness” vs. “ability” to pay in more detail in a June 2019 paper titled “The Ability to Pay for Broadband.”

Effective policy aimed at eliminating the digital divide needs to be holistic and fact-based. While attention on rural deployment is welcomed and necessary, the conversations this week show that true solutions also need to take into account adoption and cost concerns.

Discussing Horrigan’s analysis, economist Hal Singer tweeted to Senator Warren's policy team to bring attention to the idea that the digital divide is a national problem, and that access (while critical) is not as important an issue for broadband adoption as cost. "This implies a different policy intervention," he said. "If cost of service is the main obstacle, then the remedy is an end-user subsidy for low-income households, or a cost subsidy for a second (or third) provider to bring down rates via competition."

Free Press Policy Manager Dana Floberg tweeted, “[A]ccess is a persistent issue, and it’s already getting ample attention in press & policy spaces. High prices and lack of competition are primary contributors to the divide but often get completely excluded from the conversation.”

Although we may think of the history of U.S. telecommunications in terms of monopoly (AT&T), we also have a history of encouraging competition:

In the weeks ahead, the Benton Foundation will be releasing analysis from broadband policy expert Jon Sallet on how best to update America’s approach to broadband policy for the coming decade. The conversation this week is a positive sign that the debates around the digital divide could be adding nuance. We’re excited to contribute our research and roadmap to policymakers to get us to a more comprehensive, universal solution.

The digital divide is a complicated technical, economic, and political policy issue in the U.S., with unique urban and rural challenges. Some 2020 candidates are recognizing the importance of the issue and spreading awareness. But if affordable, high-capacity broadband for all in the U.S. is our goal, both access and adoption challenges need to be addressed. And competition will play a role in both these challenges. The path towards universal broadband includes expanding access by building out networks to more physical places, while also reducing other barriers like cost and digital illiteracy.

The discussion around the digital divide is changing. To stay up-to-date on it and all other broadband news, be sure to subscribe to our daily Headlines email newsletter.