Celebrating Over 25 Years of Headlines

Celebrating Over 25 Years of Headlines

As we celebrate the Benton Institute’s 40 years of impact, I'd like to take a moment to recognize one name that is a constant—a name that has become synonymous with Benton.

Kevin Taglang, Benton’s Executive Editor, recently celebrated his 25th anniversary with Benton, managing a variety of Benton resources that enable more people to participate in communications policy debates. Kevin has become one of the most read, but least known policy influencers in Washington, DC. For over two and a half decades, he has helped telecommunications policymakers stay on top of the news that shapes decisions.

In 1996, Congress passed and President Clinton signed the first major overhaul of telecommunications law in almost 62 years: the Telecommunications Act of 1996. The law called for major changes in the regulation of nearly every facet of telecommunications. While encouraging service providers to start competing against each other, the law also enshrined and renewed our national commitment to making sure that all citizens have access to advanced communications services at affordable prices. The new "Universal Service" would include support for high-cost areas, low-income households, and, for the first time, key institutions in education and health care that otherwise might not be able to meaningfully participate in the information age.

A few weeks after the law was signed, Benton realized how much work needed to be done in the coming months and years—and what was at stake for ensuring that everyone in the U.S. has access to critical communications tools. Benton saw that various sectors of the telecommunications sector would be trying to convince regulators to write rules in a way that merely favored their bottom lines. Benton understood there was more at stake. That public policy could be made better when it is better informed.  That public interest advocates could be better prepared for the debates ahead if they could stay abreast of those debates more effectively.

Back in the day, as they say, DC policy shops each had their own internal clipping services—some young staffer would actually clip and photocopy relevant newspaper and magazine articles, staple them together, and share them with the rest of the team. Kevin realized the chance we had to not only keep the Benton team informed, but to share that intel with the entire public interest community, to create common knowledge, if you will, of the stakes at hand and the ins and outs of the latest debate.

At the time, e-mail was still fairly new to most of us. But Kevin had two audacious ideas: first to use the newest tools of the information age to share the latest developments in how the telecommunications industry would be regulated going forward. That idea resulted in Headlines, the only free, reliable, and non-partisan daily digest that curates and distributes news about connectivity while highlighting the connections between communications, democracy, and public interest issues.

Over the years, many a new telecom wonk has been given the same advice: subscribe to Benton's Headlines. Day after day, Headlines digests the latest articles, analysis, research, press releases—all you need to know about the people, organizations, and concepts that shape this field.

The second idea: being connected matters and we have opportunities and choices to make those connections even better.

As one of the earliest Headlines subscribers, I saw firsthand the impact Benton had in the early days of telecom reform in the Clinton White House when we used Headlines to build what we called the CommTech briefing that served as the agenda for a weekly cabinet-level working group on telecommunications reform. Kevin’s words matter then, and his words matter even more today. He has not just published content but elevated new voices and empowered public interest advocates. Today, the many Benton resources he manages illuminate key debates, spread wisdom, and help us all understand the importance of getting everyone online. His work is not only the heart of Benton’s mission, but central to enabling, inspiring, and informing a more connected digital future. We can’t thank Kevin enough for the immense impact he has already had and look forward to continuing to advance his legacy of success in the days and years ahead. 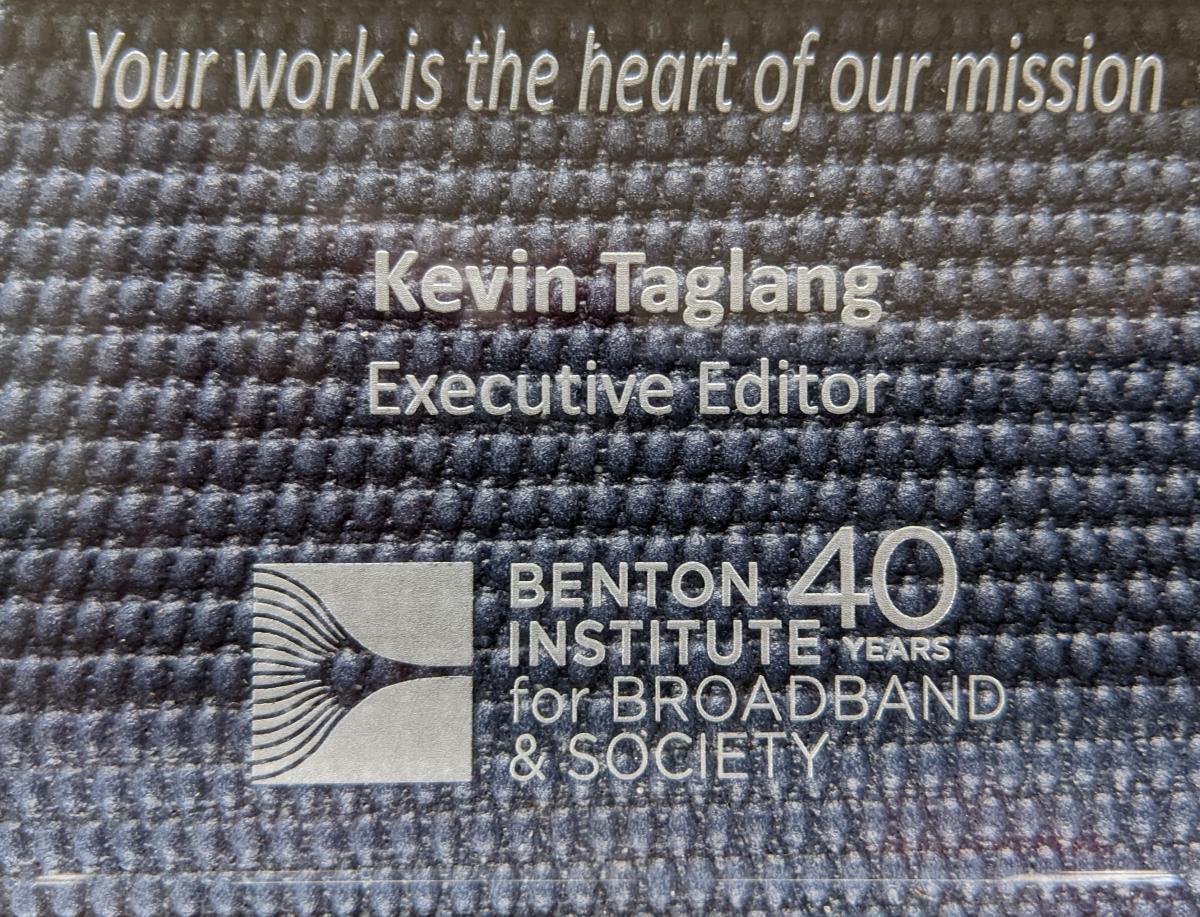 Jim Kohlenberger is a member of the Benton Institute's board of directors. He is president of JK Strategies, an innovation policy-focused consulting practice. Previously, Jim was Chief of Staff of the White House Office of Science and Technology Policy in the Obama Administration (2009-2011). Prior to that, Jim was a Senior Policy Fellow at Benton (2004-2008). Jim also served as the Senior Domestic Policy Advisor in the Clinton White House (1993-2000).