3500 Days of The National Broadband Plan

3500 Days of The National Broadband Plan

In early 2009, Congress directed the Federal Communications Commission (FCC) to develop a National Broadband Plan with a functional objective to ensure every American has “access to broadband capability.”

Now, with just 165 days left before the National Broadband Plan was to meet the plan’s original stated objectives, I explore some of the key components and objectives of the plan developed across 36 public workshops, 31 public notices, 9 public hearings, and approximately 23,000 comments from more than 700 parties.

At the beginning of the process, the FCC expected universal broadband deployment to generate benefits across a wide range of areas including: 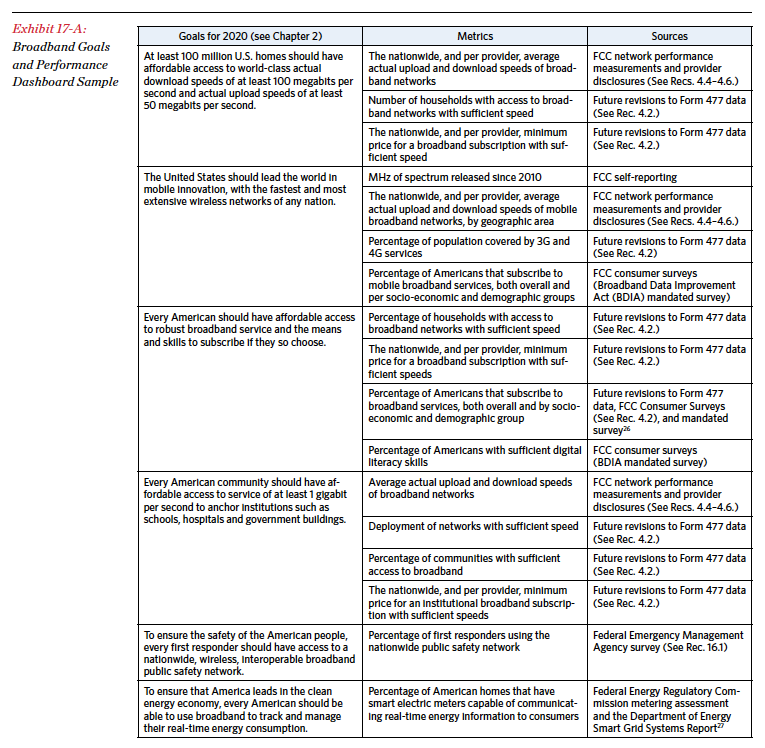 The six stated goals of the National Broadband Plan included ambitious benchmarks for speed, and objectives ranging from universal access, to public safety and even clean energy management.

The FCC, as it has done for many policy initiatives since the Telecommunications Act of 1996, relied heavily on competition theory when initially developing and implementing the broadband plan. The plan included language proposing to “[u]ndertake a comprehensive review of wholesale competition rules to help ensure competition.” Despite the heavy focus on economics, the plan did anticipate issues like internet service provider transparency for consumers and even included a proposal for user data privacy:

“Clarify the relationship between users and their online profiles to enable continued innovation and competition in applications and ensure consumer privacy, including the obligations of firms collecting personal information to allow consumers to know what information is being collected, consent to such collection, correct it if necessary, and control disclosure of such personal information to third parties.”

Now, 3500 days after the release of the plan, the FCC continues to try different approaches to assist broadband development. While nominally continuing to favor a marketplace approach, throughout 2019 the FCC has made a number of rolling announcements of block subsidies to be used over a 10-year period to assist in broadband deployment. And, to be fair to the agency, any progress towards the stated goals of the plan is to be commended.

Importantly, goal number 1 of the plan was ultimately pursued using a different benchmark by the FCC, namely broadband service with download speed of 25 Mbps and upload speed of 3 Mbps. Applying 25/3 as the metric (rather than 100/50 as proposed in the National Broadband Plan), 93.5 percent of the overall population had access by the end of 2017, far short of achieving the plan’s targets on speed and access. While the overall gap continues to shrink, targeted gaps in rural and tribal areas remain significant. According to FCC data, which has been criticized for overstating broadband deployment, over 26 percent of Americans in rural areas and 32 percent of Americans in Tribal lands lack access to 25/3, fixed-broadband.  Approximately two percent of urban areas still lack access to broadband as well.

Looking at goal number 4, the long-term connectivity goal for schools, libraries and other anchor institutions of 1 Gbps speeds, a 2018 estimate suggests just 28 percent of school districts currently meet the goal. Another objective we’ve failed to reach by the FCC’s own metric.

The public safety network proposed in goal number 5 will likely be on the agency’s radar moving forward, but less as an element of the broadband plan than as part of the remand issued by the DC Circuit in the Mozilla v. FCC decision a few weeks ago. While a public safety network represents a massive undertaking, and there has been some progress, like goal number 6 which would have promoted a green energy economy, a fully operational public safety broadband network will be another objective uncompleted during the time that is remaining in the plan.

Ten years is a great deal of time in the telecommunications realm, and it is true that the plan asked a great deal of the FCC from the very start. But it is just as true to say that the FCC has failed to deliver. The internet, and the broadband infrastructure that delivers it, are potentially the greatest tools for maximizing political participation in a democratic society. Making sure that high-speed, affordable internet service is available to as many people as possible is the criteria we should be using to evaluate the FCC. 3,500 days after the plan was released, it is clear the agency will not meet the plan’s stated benchmarks for speed, for universal access, for public safety communications, nor for access to high-speed broadband for anchor institutions like schools and libraries or to provide functional energy management controls. Each failure represents an unfilled public-interest objective.

It is time to make a new plan. A plan with realistic, incremental goals backed by the necessary subsidies, and a willingness to admit that the government has taken the lead on every communication system since the creation of the post office.  We can do better. But I am not sure we can afford to wait another 3,500 days to do so.

Christopher Terry is a publicly engaged scholar who is currently an assistant professor of media law and ethics in the Hubbard School of Journalism and Mass Communication at the University of Minnesota. He was a commercial radio producer for nearly 15 years before receiving his Ph.D. in Mass Communication and Law from the University of Wisconsin. His research agenda involves maximizing the opportunities for political participation in a democratic society. He has published research on media ownership policy, minority ownership policy, indecency regulation and the regulation of political advertising.