The Hoopa Valley versus the Digital Divide

Youth leader on climate action Danielle Frank explains how connectivity has slowed the flow of information and dampened public participation during a crisis in the Klamath-Trinity communities.

This summer, the mountains moved in Hoopa Valley, CA. As a wildfire burned through trees and vegetation, a thunderstorm dropped two inches of rain in one day. The result was catastrophic. The rain, coupled with the unstable burned ground, caused the mountainsides along Klamath, Trinity, and Salmon rivers to collapse.

“Our community was freaking out, like they thought it was the end of the world,” said Danielle Frank, 19, standing barefoot by the rocks of the Trinity River in Hoopa Valley.

“And we couldn't tell them it wasn't because we had no connectivity.”

The Trinity River is a sacred place for the Hoopa Tribe, where ceremony and celebration often collide. But on August 6, the falling sediment from the mountains suffocated the three connecting rivers, leaving dead fish floating along the banks. The once clear, cold water felt and looked like mud.

Meanwhile, online, residents were clamoring to Facebook to learn what had happened. Others started to email Frank, who serves as a youth coordinator with Save California Salmon and Miss Na:tini-we’, a cultural and political ambassador for the Hoopa Valley Tribe. She didn’t have any answers at first.

Together with her coworkers, she tried to assess the damage, but there was no cell service, no cellular data, or internet near the river. It took three days before she could gather the information and find a connection to publish it online: more than 40,000 fish were estimated dead on the Klamath River, her team finally explained in a Facebook post.

“Everyone was sharing it. It felt really good to have that resource available,” she said, “but it definitely took too long to get out there.”

All across this densely forested valley, tribal members are going online to seek and share information about their community. But the demand for internet has outstripped the region’s limited infrastructure. 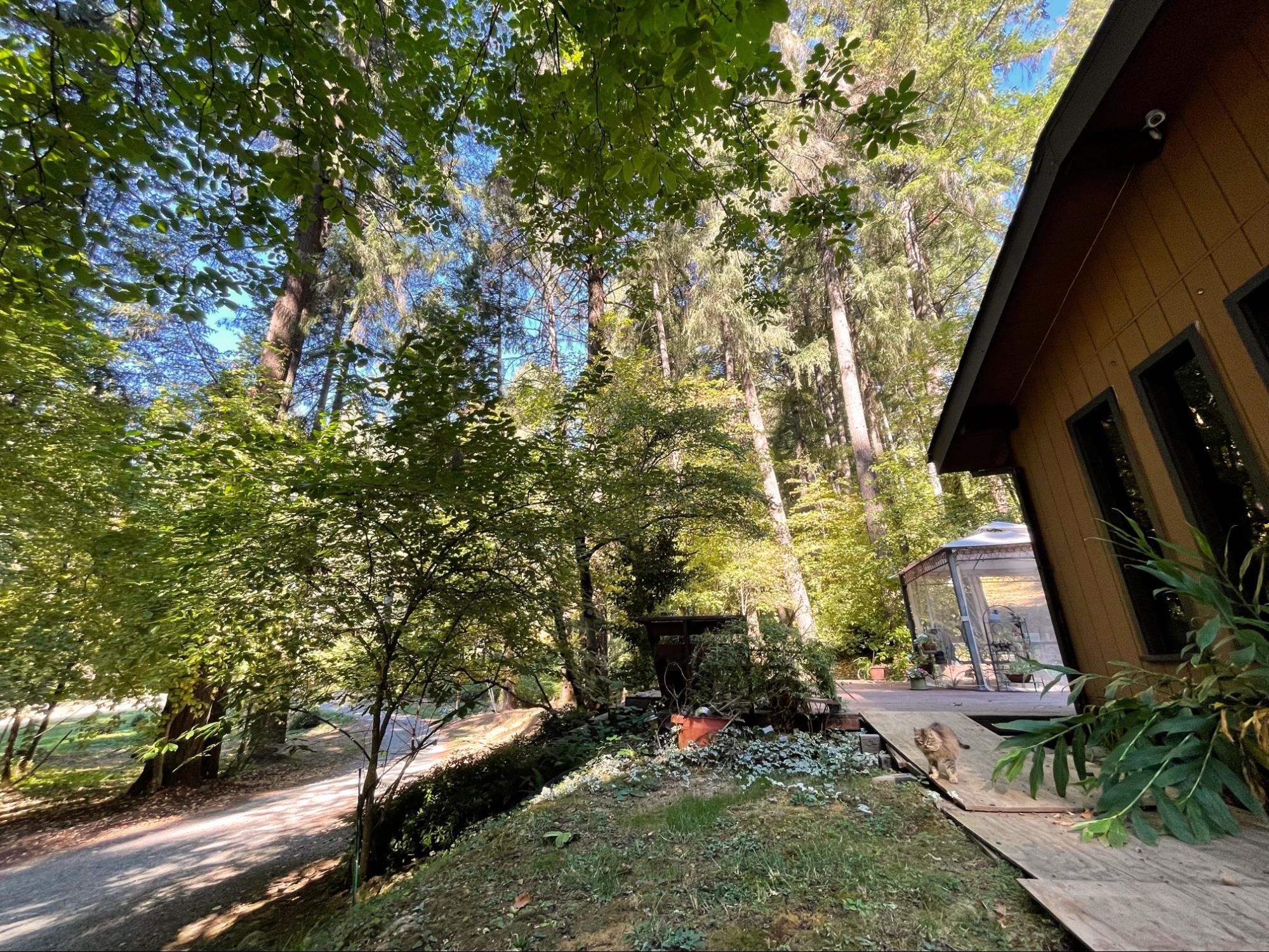 Off the rocking chair

It’s a problem that keeps Linnea Jackson busy. She serves as the general manager of the Hoopa Valley Public Utilities District, which rolled out a tribally-owned and operated internet service last year called Acorn Wireless. Her office is a buzz of activity, a place where mechanics at the business next door come to say hello and where friends, family, and coworkers can sometimes blend. (Jackson helped to produce this story. She has no editorial oversight).

Prior to the start of the program in 2021, just 15 percent of residents in Hoopa Valley had adequate internet for online learning at home. Since its start, Acorn Wireless has offered internet in certain areas through a series of towers that beam signals across the valley, the same kind of technology used by cellular companies to offer wireless data.

That new service has been a boon for tribal elder, Marcellene Norton. Her house is surrounded by tall coniferous trees that prevented the region’s other internet provider, Velocity Technology, from offering robust service.

When she isn’t tending to her farm or looking after her children and grandchildren, she’s a watchdog. Norton, 82, has monitored local government for years, formerly serving as a councilmember. Now she attends almost every General Meeting with the tribal council. She regularly combs through pages of public records and briefings so she can stay informed about the tribe’s business, especially its financial health.

“Sometimes my family wants me to just bow out and sit home in my rocking chair,” she says with a laugh.

But she won’t sit still. When Tribal council meetings moved online at the start of the covid-19 pandemic, she adapted and signed up for Acorn Wireless. She asked her daughter for help learning Zoom. Soon, she started meeting with three other tribal elders who shared her concerns about the tribe’s fiscal management.

“We felt the need to try to get information out to the membership,” she said, “and then we thought, I don’t know how the idea came up, to put it on Facebook.” 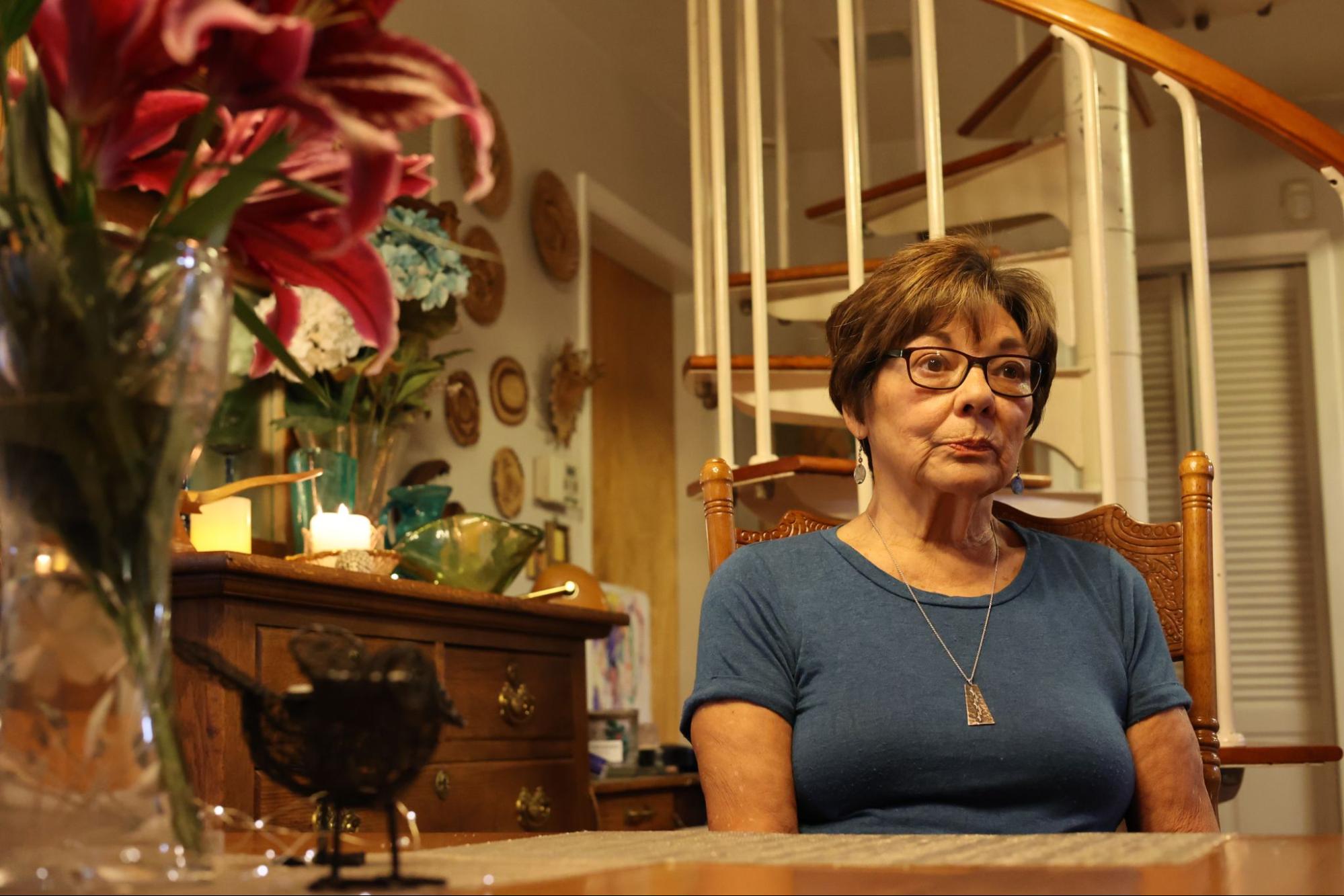 With the help of a friend’s daughter, the group of elders started posting videos on Facebook, explaining the tribe’s budget.

Their videos have gathered hundreds of views and sparked the ire of some tribal leaders, said Norton: “We certainly have gotten criticism for doing this and putting it out to the public, airing our dirty linen.”

Stuck in the Valley

Where Acorn Wireless is an asset for Norton, it’s a liability for others. The Hoopa Valley Tribe spans 92,000 acres, making it the largest Indian reservation in California but an expensive one to connect. Frank, for example, was too far south to reach the Acorn Wireless network when she needed to post information about the state of the river.

Beaming a wireless signal across and along this densely forested valley poses a number of structural barriers. People living in “nooks and crannies” of the valley, or along hillsides or ravines, are difficult to reach, said Jackson. She added that fires have burned through some of the above ground poles and wires and that wildfire smoke can hinder or stop the wireless signal.

The fastest and most reliable solution would be a fiber network, where wires travel to each house and run underground, but the cost of fiber is steep.

Without a strong signal at home, tribal council member Jill Sherman-Warne works outside on a creaky black patio table, overlooking the Trinity River. She has other complaints too, like a time in October when the internet cut out at the tribal government office and she couldn’t access the day’s documents during a council meeting.

The biggest challenge is for her father, Herman. He had a stroke in 1984 that left him paralyzed on his right side.

“A portion of his heart is actually dead,” said Jill, as Herman listened and struggled to add a word or two. “He is 100 percent reliant on his pacemaker to maintain sinus rhythm.”

The battery for the device must be monitored to prevent it from malfunctioning and stopping his heart, so he travels to see a cardiologist about once a month for check ups. It’s a two and a half hour drive, each way, to the doctor in the city of Redding. 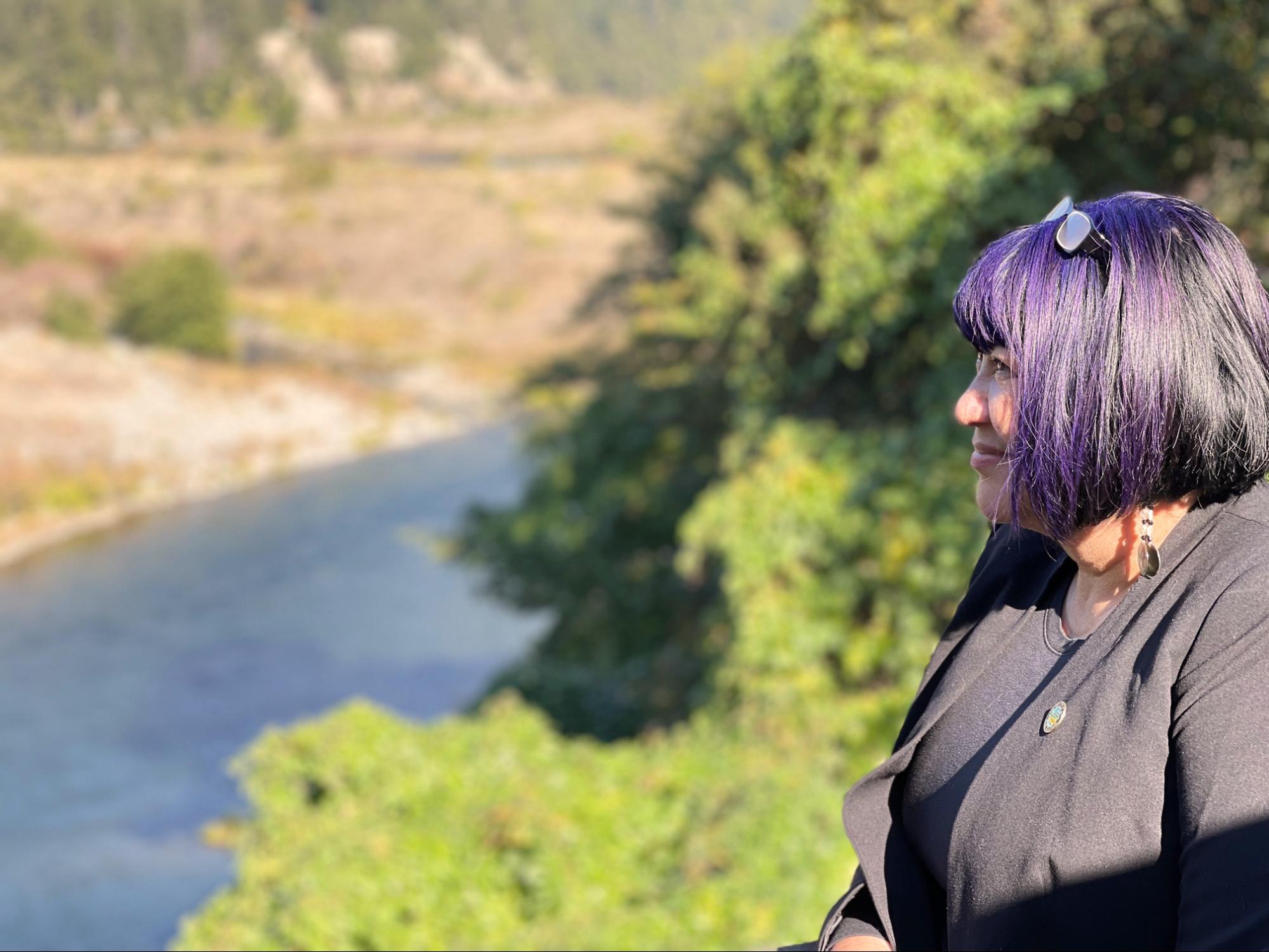 Jill Sherman-Warne works from the porch of her father's home overlooking the Trinity River. Inside the house, connectivity prevents live streaming because the home lacks line of sight to Hoopa's only cell phone tower.

The cardiologist offered him an electronic device that would monitor his heart rate remotely and reduce the need for regular check ups. Jill downloaded the corresponding app on her phone, but it wouldn’t work. They brought the device back to the doctor, who tested it in the office and told them to get a new one. It wasn’t until they got a second one and returned home that they realized the root of the problem: wifi.

“Of course it worked in their office. They’re in the middle of Redding,” she said. “Even when we try to use telehealth, it’s still dependent on our ability to connect to the outside world.” 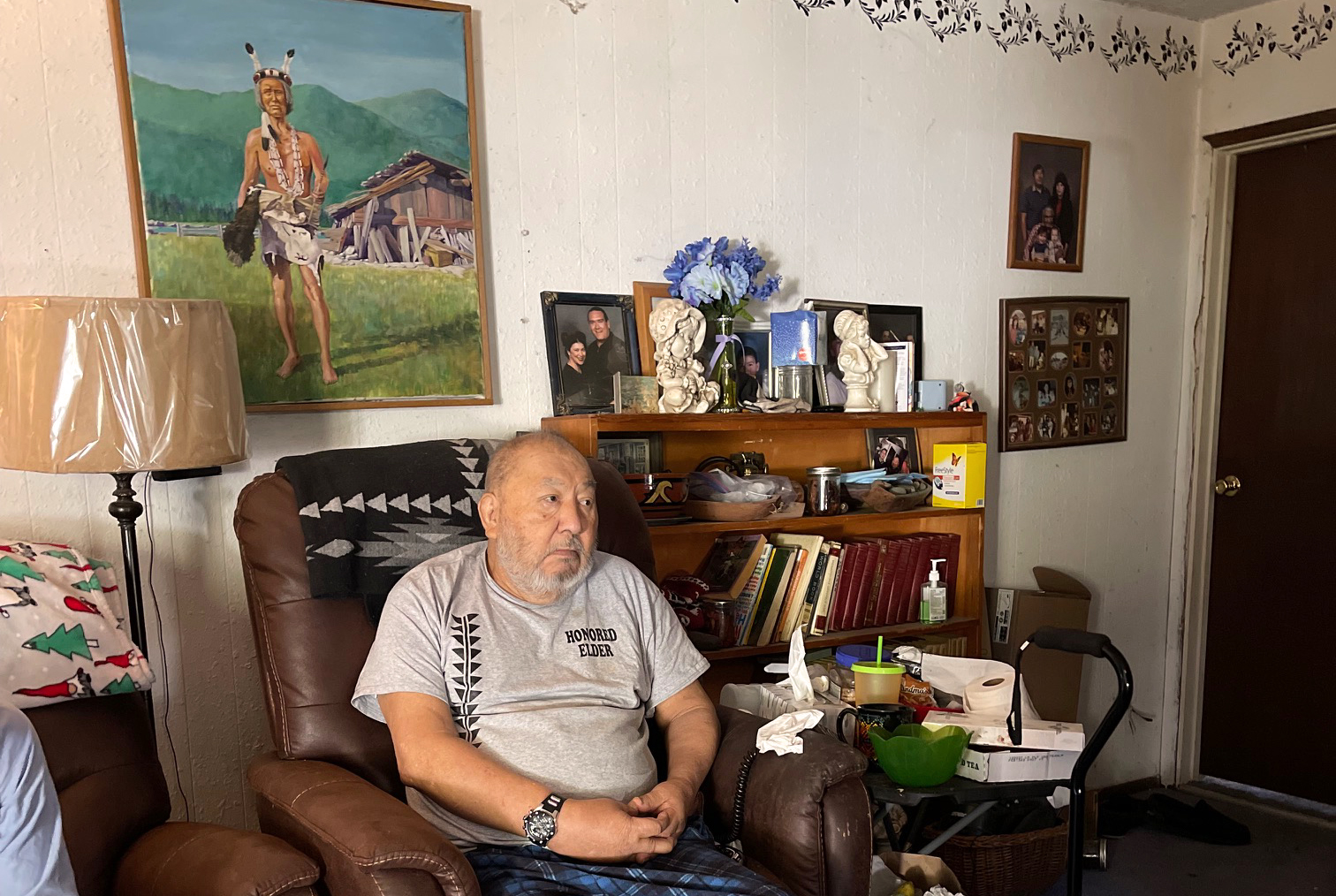 Herman Sherman, a U.S. Veteran and Hupa elder relies on a pacemaker to keep his heart beating. Because his home lacks high-speed internet, he must travel two and a half hours to his cardiologist once a month to be sure the pacemaker is functioning properly.

Getting up to speed

Jackson is well aware of the network’s shortcomings, but she sees an opportunity. This fall, the Hoopa Valley Utilities District received more than $65 million in funding from the federal government to improve its internet infrastructure. By comparison, the initial launch of Acorn Wireless in 2021 took $2 million to set up.

The new grant will expand the current wireless network and introduce underground cables that connect directly to homes. It’s the first time that residents will have access to fiber internet. The expansion plans to connect 1,000 households in the tribe, 64 businesses, and 19 community institutions like schools and hospitals.

The wires are just a start, though. Unlike Norton, many residents, especially older ones, need support learning how to use or trust technology.

Arnold Davis Jr. is one of Jackson’s employees at the utilities district, but he readily admits his distaste for the internet. He doesn’t follow tribal politics or river updates on Facebook; he doesn’t have an account. He once passed on a promotion opportunity in part because it would have required him to sit behind a computer for hours a day.

For Davis, technology is incremental and practical. He doesn’t use the internet at home, unless his wife shows him how. Yet he pays the premium rate for Acorn Wireless because it helps him save in other places: money on gas or on his car’s wear and tear given the trips he doesn’t have to make anymore.

In addition to the infrastructure investments, Jackson has been working on education, too. She recently helped Hoopa Valley become one of 18 pilot cities for a Digital Navigator Corps, which will give the tribe a cohort of community educators who can guide residents through questions about technology.

In the meanwhile, Jackson is gentle with Davis, nudging him every time he needs to complete an online training for the state. He holds a binder in his hand with packets of paper that her office prints out for him. He appreciates the help, even if he knows he’s a little behind. 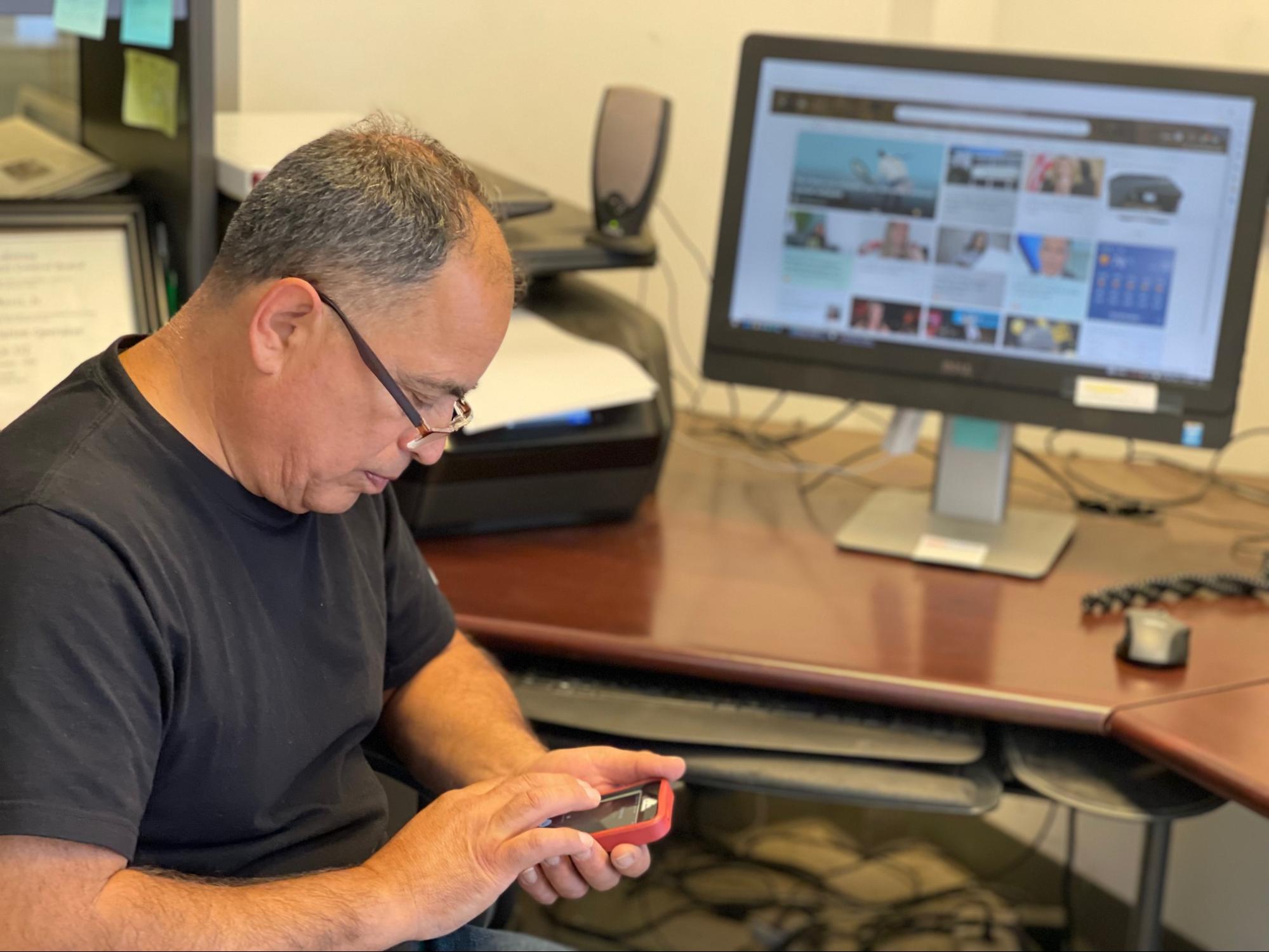 This project is supported by Humanity in Action and the Benton Institute for Broadband & Society. It was written by Adam Echelman.