Jonathan Sallet on the Need to Reset U.S. Broadband Policy

Jonathan Sallet on the Need to Reset U.S. Broadband Policy

You’re reading the Benton Institute for Broadband & Society’s Weekly Digest, a recap of the biggest (or most overlooked) telecommunications stories of the week. The digest is delivered via e-mail each Friday.

This week, Benton Senior Fellow Jonathan Sallet called for a new national broadband agenda. Over the past year, Jon has been talking to broadband leaders around the country, asking about who’s currently connected and who’s not. You can read Jon’s findings in Broadband for America’s Future: A Vision for the 2020s. Jon delivered the keynote address at the Broadband Communities conference in Virginia on Wednesday. Afterward, we caught up with him to discuss broadband deployment, competition, and adoption.

Why did you take on this project?

Because it’s important that in the next decade everyone in America should be able to use High-Performance Broadband. By that I mean fixed broadband, in competitive markets, delivered over networks fit for the future. That’s why we think it’s time to start setting a course for broadband policy for the next decade.

Two facets of the current challenges became clear in our research.

First, broadband alone will not solve every problem. But we cannot solve our biggest problems without broadband. This is true for climate change, education (for all ages), agriculture, healthcare and, of course, the economy.

In today’s—and tomorrow’s—world, if you don’t have broadband, you are disconnected from continuing your education, gaining new job skills, finding employment, and participating fully in your communities.

Second, what needs to be done in the next ten years is being done in communities around the nation—experimenting with ways to deliver broadband. We want to share the stories from these communities so that the nation can learn the lessons of their successes.

Earlier this year, the Federal Communications Commission concluded that broadband is being deployed to all Americans in a reasonable and timely fashion, noting that the number of Americans lacking access to fixed terrestrial 25 Mbps/3 Mbps service had fallen from 26.1 million to 21.3 million. What did you find in your research over the last year?

Part of the problem is that the data the FCC relies upon, by its own admission, doesn’t give an accurate depiction of broadband deployment. Knowing just where broadband is and isn’t available is more difficult than one would—or should—expect. Extensive research on broadband access in Pennsylvania, for example, found that no Pennsylvania county had the broadband coverage that the FCC said was enjoyed by every Pennsylvania county. And the research showed that broadband speeds were substantially slower in rural counties than in urban ones, possibly indicating a systematic and growing overstatement of broadband service availability in rural communities.

So, what do we, as a nation, need to do differently?

Well, to be sure, we need to take a holistic approach. For example, we need to do a better job of fostering competition. Think of how limited fixed-broadband competition is right now. According to FCC analysis, more than 35% of Americans live in areas where there is only one broadband provider offering download speeds of 100 Mbps; and more than 70% of Americans live in markets with only one or two broadband providers offering service at that speed. But we know from experience that more competition will lead to improved service, lower prices, and innovation.

Who are the new entrants that will shake up local broadband markets? We saw lots of great work being done by rural electrical cooperatives, and through collaborations between local governmental and private companies.

For sure, we are going to need some level of public support to deploy High-Performance Broadband networks to all corners of the U.S. Of course, to fully grasp the magnitude of that investment, we need a better understanding of where networks currently reach and where they don’t.

And we need to understand not just where it is but what it is. By that I mean the capacity of the networks. Not just the speeds at which they operate but other critical criteria, like latency, monthly usage caps, and pricing.

Now maybe I’ve been talking too much – it’s happened before – talking too much about the physical hardware that makes up a network, the wires. But this is really about people. So, we can’t just build it and hope people will come. We have to also tackle adoption issues. We have to make service more affordable. That’s a big reason to encourage competition. And we have to address digital literacy, so people have the skills they need to make the best use of broadband.

And, if I can have one more... we need more support for community anchor institutions so they can do more.

What role do community institutions play in broadband policy?

Schools, libraries, hospitals, other anchors are critical, just critical to getting everyone connected and strengthening communities. And I’ll tell you why: because they play such a big role in broadband deployment, competition, and adoption.

First, community anchor institutions have huge broadband needs of their own. Be their missions in education, information access, or health services – they need High-Performance Broadband to deliver the services that are so critical in their communities. So, they need access to competitively-priced broadband.

But in the 21st century, community anchors’ missions are moving beyond their walls. Libraries no longer deliver knowledge that is housed only within their buildings or the covers of hardbound books. Public education today depends, in part, on the ability of students and teachers to use broadband connections—both in school and out. And healthcare facilities see and monitor patients both in hospitals and in their homes.

Broadband allows these institutions to reach beyond their walls and serve their users wherever those users are.

Finally, and I don’t think this is talked about enough, bringing broadband to anchors can serve as a launching pad for communitywide access. Publicly funded networks, I believe, should be open making it easier for competitive providers to build out last-mile networks at their own expense. 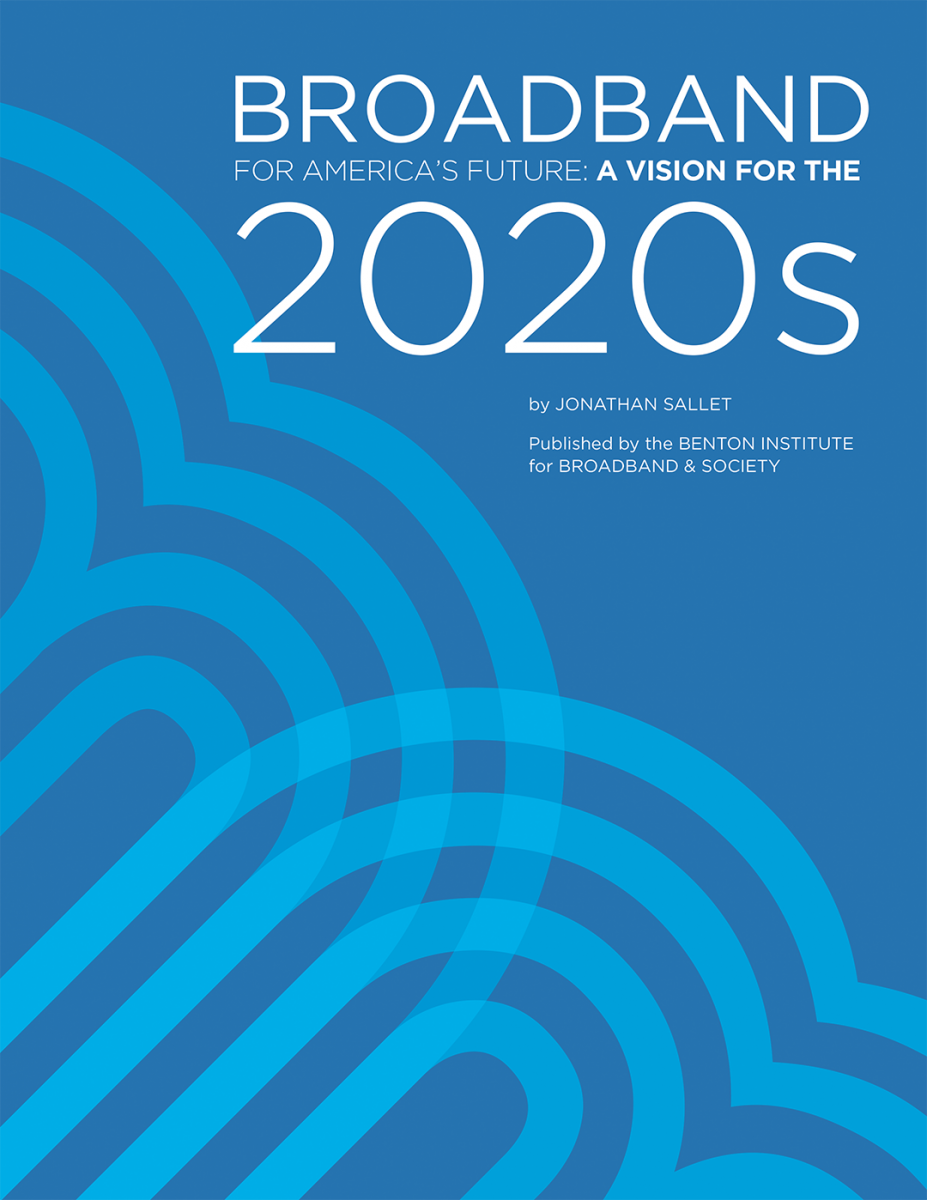 What do you mean by “High-Performance Broadband”? Isn’t any broadband good enough?

What we mean by “High-Performance Broadband” is fixed broadband networks that are fit for the future. Networks that provide fast, symmetrical upload and download speeds, low latency (moving data without noticeable delay), ample monthly usage capacity, and security from cyberattacks.

Networks that, once installed, can be easily upgraded as the demand for greater broadband performance continues to increase.

That’s a moving target, obviously. It is best captured by a broad recognition of performance characteristics whenever public policy is made.

But, now, 25/3 is out-of-date. Especially when we are thinking about significant public spending to support the capital costs of new broadband deployment.

That is why High-Performance Broadband—and we’re talking speeds of 100/100 minimum—should be an option that is widely available and affordable over networks are scalable—able to meet future demands that today can’t be fully predicted.

High-Performance Broadband is the benchmark against which public policy in the next decade should be measured. America will be best served by competitive broadband connections that are “future proof” against the kind of usage patterns—including thirst for greater speeds—likely to occur by 2030.

Can we really get there?

I think we have to.

Students’ ability to learn will depend not just on the bandwidth that reaches their schools but also on how well they can connect to their schoolwork when they are outside their school buildings.

The future of agriculture is now rooted in broadband. When broadband-enabled precision technologies are pervasively deployed, they are predicted to cut water use by up to 30 percent, reduce herbicide use by 99.99 percent, reduce fuel use by 10 percent, boost yields by 70 percent, and cut food prices in half.

Broadband is part of our response to climate change. Broadband-enabled technologies have the potential to make the smart grid even smarter, renewable power more prevalent, everyday devices more efficient, and energy more affordable.

Ubiquitous access to High-Performance Broadband can help us reduce overall net electricity demand by more than 25 percent, 60 cut greenhouse gas emissions by 19 percent,61 save billions on our energy bills, help make us more energy independent, and enable a smarter electric grid that is more efficient, reliable, and resilient.

High-Performance Broadband isn’t the silver bullet for our greatest challenges, but it is the communications infrastructure over which solutions to those challenges will be delivered.